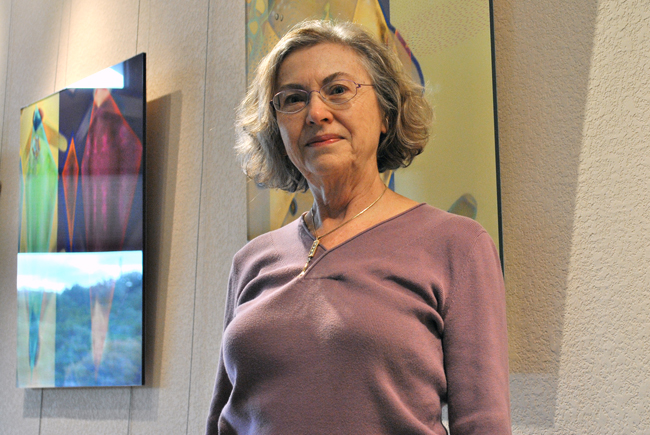 Where some artists use pencils or paintbrushes, UT alumna Chalda Maloff uses a Wacom tablet and an electronic stylus. Each stroke she makes with her stylus is transcribed into a computer, coming together to make digital paintings.

Maloff’s new exhibit, “Joy to the Fishes,” opens Monday at Mill and Leaf in the Arboretum and will run through Jan. 5. Maloff said the inspiration for the collection came to her while she was snorkeling in the Caribbean.

“I observed in myself and others an altered frame of mind following underwater viewing — an increased sense of well-being and reverie, a clearing of mental clutter,” Maloff said. “I considered the types of compositions, forms and aesthetic constructs that might facilitate this mind-set.”

According to Maloff, working with the digital medium allows her to do things that are not plausible with mediums like drawing or painting. She can zoom in to meticulous details, mix different mediums, reverse mistakes and use editable digital layers.

“I have always had a tendency to conceptualize an artwork in strata, so this facility of the digital medium is particularly aligned with my way of thinking,” Maloff said. “The computer and art software are beautiful tools for creating artwork.”

Maloff discovered digital media when she was going to school in California, after years of working with oils and acrylics. She received a graduate degree in computer science from the University of California-Berkeley in addition to the art history degree she already held.

As a graduate student in the early ’70s, Maloff visited the Palo Alto Research Center, a research and development center in Palo Alto, California. While there, she received a private demonstration of the earliest forms of digital art technology.

She still continued her work with natural mediums for years after and obtained a doctorate in human ecology from the University of Texas Health Science Center — Houston. Meanwhile, digital art technologies were becoming more advanced.

Over a decade after she visited PARC, Maloff fell ill and was unable to get out of bed to paint. Her husband surprised her with an early version of digital art software, which he packed in a paint can, so, when she opened the canister, she got a whiff of natural
paint smell.

“And once I fully grasped the current possibilities of the digital medium, I continued with it even after I regained my health,” Maloff said.

After showing her art in other states and countries, Maloff is excited to bring her work back home with “Joy to the Fishes.”

“Recently, I’ve rediscovered how much fun it is to show closer to home,” Maloff said. “To see familiar faces at the receptions and foster ongoing relationships and dialogues.”