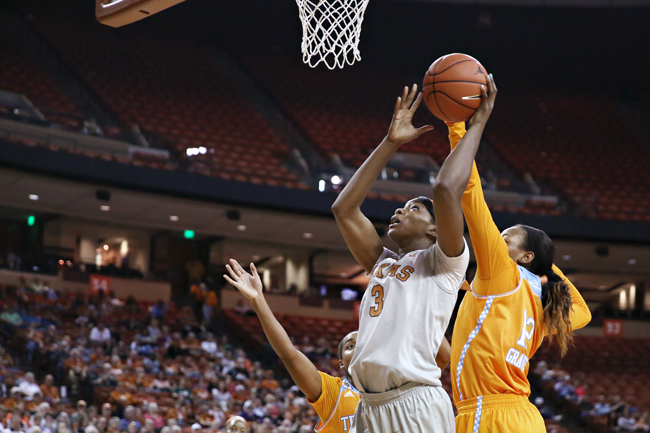 Outscoring its opponent 38-26 in the paint under the leadership of sophomore center Kelsey Lang’s 18 points and six rebounds, the women’s basketball team defeated the fourth-ranked Tennessee Lady Volunteers, 72-59.

Despite this matchup being the 33rd consecutive season the teams played one another, Sunday’s victory is the first time since 2008 the Longhorns defeated the Lady Volunteers.

Texas head coach Karen Aston said she didn’t know whether the team would win but knew they had prepared well.

“I thought this was a really tremendous effort from our basketball team,” Aston said. “I think our inside game was terrific today. They battled really hard … and did the things it takes to be a presence in the paint.”

The Longhorns grabbed the lead early in the first half and extended as high as a 12-point margin.

In the second half, sophomore guard Brianna Taylor and senior forward Nneka Enemkpali continued their scoring streaks. Enemkpali went 7-of-10 from the field to score 13 of her 17 points in the second half. Taylor did not miss a shot the entire game, totaling 10 points and five rebounds.

“I come off the bench and give us energy, rebound, defend and help [Enemkpali] out down there in the paint,” Taylor said. “[I’m] just coming in, being solid and getting stops on defense, so I’m learning.”

“We have players that have never been in these situations before or players that are older that have not had these significant wins before, so I think from a confidence perspective, it is unbelievable,” Aston said. “Now we have a long way to go.”

This season, Lang has scored double digits in every game. She said that after the team found out about junior center Imani McGee-Stafford’s injury, she changed her mentality to become an offensive threat.

“My teammates and coaches have helped me so much with that,” Lang said. “I have gained so much confidence because they have confidence in me.”

Freshman guard Ariel Atkins ended the game with 12 points on 5-of-9 shooting. Enemkpali said she overheard Atkins talking about how fun the season has been so far, but Enemkpali said the veterans must remind teammates that the season is far from over.

The Longhorns will continue their six-game home stint against New Mexico on Wednesday at 7 p.m.