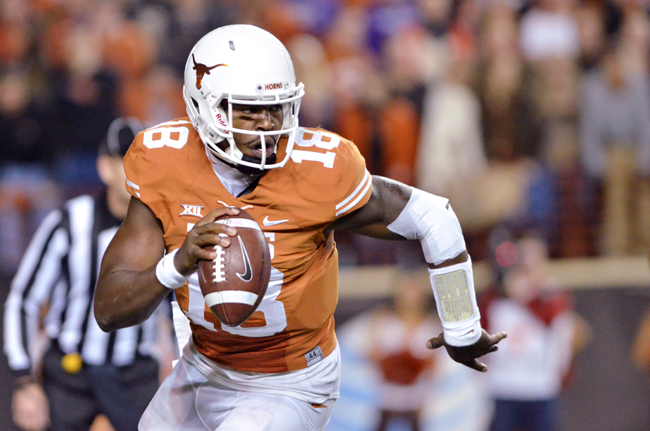 Heading into the home matchup against BYU in September, Texas’ offensive line made headlines. Following a series of suspensions and injuries, the linemen boasted just five combined starts, making them the youngest starting line in the nation.

Behind center, sophomore quarterback Tyrone Swoopes didn’t add to the number. Although he’d seen a few minutes on the field during blowout games in 2013, his starting record still sat at 0-0. The game’s final score — 41-7, in BYU’s favor — reflected the team’s youth. Even so, the coaching staff tried to remain positive.

“I know [Swoopes] may have thrown an interception there late, but for him to be a first-time starter and compete as well as he did was unbelievable,” head coach Charlie Strong said after the game on Sept. 6.

Ten games and five losses later, inexperience no longer works as an excuse. Swoopes, the offensive linemen and running backs have all shown sparks of greatness this season. Their recent wins against West Virginia and Oklahoma State featured a gelling
offensive attack.

Against TCU, all of that seemed like a distant memory. Instead of reflecting on the progress already achieved, Strong said the team showed its need for progress in the future.

The defense, it could be argued, was ready to go Thursday. Holding TCU to a season-low 368 total yards, Texas even forced two turnovers and two punts in the third quarter. But the offense struggled, allowing five turnovers for 98 yards. Four of those turnovers came via Swoopes’ interceptions. The performance left Swoopes stunned.

“I just couldn’t get anything going — I don’t really know what else it was,” Swoopes said. “I’ll just have to watch and see what happened. I knew I wasn’t playing well.”

Texas’ limited rushing game also contributed to its 48-10 loss. The Longhorns’ ground threat virtually disappeared, as they ran for just 90 yards — 61 of which Swoopes recorded —  after averaging more than 185 through the last three games. Junior center Taylor Doyle said the offensive line shoulders that blame.

“It’s tough,” Doyle said. “We didn’t find a rhythm on offense. We didn’t win the turnover battle, and that falls on the offensive line, you know, keeping Tyrone clean. It is disappointing, but we know that we have a lot of work to do, and we’re going to stay positive going into this bowl game.”

Entering the postseason, the Longhorns know they need to take advantage of extra practice time. Their chances to improve and make necessary adjustments before month’s end may be limited. But the efforts and the tone will carry over to next season.

“When we start up again in January, that’s what it’s going to be about,” Strong said. “Some guys may not like it. They may not want to be here. That’s fine. But we gotta get this program back to where it’s going to be — where it needs to be. It’s going to happen; we’ll get it back there.”