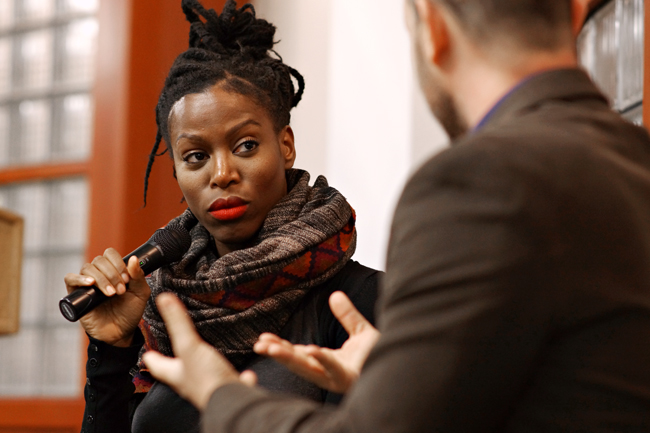 African author Taiye Selasi spoke at the Symposium for African Writers at the Student Union on Tuesday.

Four other authors sat in the front row to see Selasi, as she spoke about her inspirations, writing techniques and recent exploration of African literature.

Selasi, author of “Ghana Must Go: A Novel” and several other novels, said her writing reflects that she never quite understood her own life and her family’s position in the world.

Selasi said that, while class position remained a constant question in her everyday life, the hospital where her parents worked as doctors showed a different picture.

“The one thing that was clear to me, even as a young person, when I went to the hospital, was that all people were equal,” Selasi said. “Strangely, the hospital — the illness, it occurs to me now — became this space in which color and class did not exist.”

Selasi said her stories rarely move in an organized, linear method because it is not natural.

“I think that I had a sort of constitutional impatience with purely linear narrative,” Selasi said. “I think ‘Driver’ is the only thing I’ve ever written, including my journal entries, that just goes from point A to point Z. My mind doesn’t work that way, I am not convinced that anyone’s mind works that way.”

“An important part of what she’s doing is writing about middle-class Africa, writing about Africans outside of the narratives through which Africanness is traditionally construed in the media, but in a way that is not triumphant — it’s just very human,” Bady said.

“It was important for our students to address him about the literature he had written,” Lindfors said. “He had published four fast-breaking novels by that time and was a well-known figure who contributed enormously to the awareness of students not only about Nigerian politics — what was going on in Nigeria at the time — but also an insight into what African writers were doing to address some of the problems in their own society.”