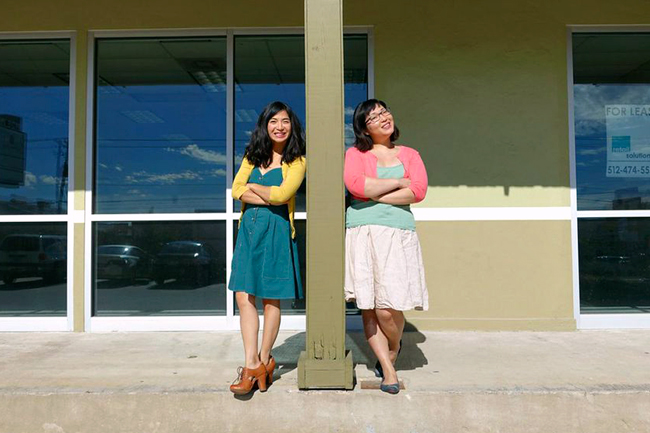 Sisters Ashley and Christina Cheng grew up playing in their kitchen, trying to impress each other with whatever weird concoction they could invent. Now that they’ve grown up, they’re showing the rest of the world what they can make — ice cream.

Spun Ice Cream, opening early 2015, will make its ice cream using a technique called “spinning,” in which liquid nitrogen mixes with cream and flavorings. The nitrogen freezes the water molecules in the milk, turning liquid to creamy ice in under than a minute. Spun will be located in a shopping center off East Seventh and Chicon streets.

Christina and Ashley are familiar with what it takes to make a restaurant successful. Their parents own and operate Chinatown restaurants, which have several locations around Austin. Growing up around their parents’ restaurants fostered a lifelong interest for the culinary arts.

After getting her master’s degree in journalism from UT, Christina went to culinary school and began making desserts for restaurants and caterers around Austin.

“Luckily for me, my sister grew up to have real talent in the kitchen,” Ashley said. “When she was ready to open her own place, I had just moved back home and had the time to help her out. Who better to do your marketing and PR than your biggest fan since childhood?”

Ashley said molecular gastronomy has been a big food trend in recent years, but they loved the idea because they could integrate science into the process of making food. Chemical engineering senior Aditya Mukerji, who used liquid nitrogen to make ice cream in high school, said the process is actually pretty simple.

“Mix the ingredients in a pressure-sealed vessel like a pressure cooker and add the liquid nitrogen while churning,” Mukerji said. “The [nitrogen] will boil off into the atmosphere as soon as you open the lid, leaving no traces of nitrogen.”

Mukerji, a member of the International Gastronomy Society, said Spun Ice Cream would not be the first place to use liquid nitrogen. Sub Zero Ice Cream and Yogurt, which also uses liquid nitrogen to make its ice cream, opened in 2004 in Utah and has expanded to Texas. But Christina said locally sourced and organic ingredients will set Spun apart from other shops like it.

“[Using liquid nitrogen] wasn’t just for show, but it made a big difference in flavor and texture,” Ashley said. “Because we can make the ice cream fresh to order, it also means we don’t need to use preservatives or stabilizers.”

The sisters’ ice cream parlor will also put a heavier focus on their homemade seasonal toppings, such as old-fashioned pie crumble, candied citrus confetti and Texas pecan brittle. Christina said she’ll be using the nitrogen-spun ice cream as more of a canvas to experiment with fun topping ideas and unexpected flavor combinations.

“The beauty of using liquid nitrogen is that the flavors come out really pure and intense,” Christina said. “We’re sourcing our milk, nuts, herbs, chocolate as sustainably and locally as possible, so we want the purity of those ingredients to shine.”

Ashley said, even though she and her sister are familiar with the restaurant industry, this ice cream shop is totally different from what their parents did. She said there are days when they feel like they don’t know what they’re doing, but that’s why she’s so glad they are in it together.

“Food is how we communicate in our family,” Ashley said. “It’s just what we do.”