Notes from Texas’ win against UT-Arlington 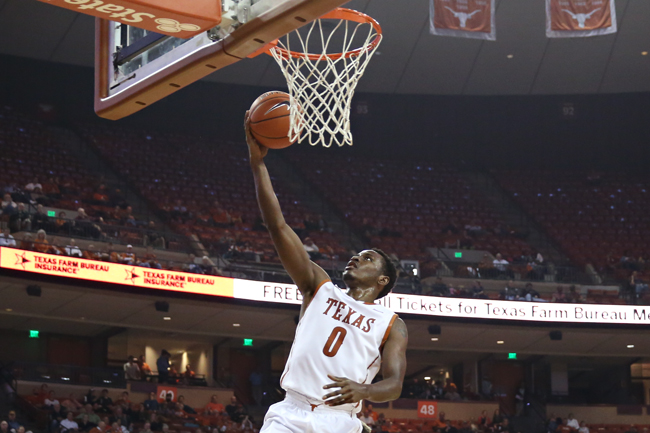 The men’s basketball team found itself in a close one against a lower-ranked UT-Arlington team but pulled out a 63-53 victory in the end. Freshman forward Myles Turner led the Longhorns with an 18 point, 10 rebound double-double. Here are some notes from Tuesday’s game.

Near the end of the first half, junior guard Javan Felix went down and was slow to get up. The play continued as Felix lay on the ground clutching his left foot — the same one that caused him to miss the game against St. Francis last Tuesday. He walked off the court under his own power before being examined by the medical staff. He returned before halftime and appeared to be all right. Head coach Rick Barnes acknowledged that Felix is banged up but didn’t seem too concerned. He will go against Kentucky on Friday.

Going 5-27 (18.5 percent) from deep may have cut it against a weaker UT-Arlington squad, but it won’t against Kentucky or the majority of the Big 12 teams on Texas’ schedule. Senior forward Jonathan Holmes connected on just 1-of-7. Felix only got 1-of-4. Those are Texas’ two best shooters. The shots weren’t contested, forced shots, either, as many of them were wide-open looks.

“We had so many wide-open shots,” Barnes said. “Some nights they don’t go in.”

The two wings have found themselves in Barnes’ doghouse. With a lesser opponent, UT-Arlington, in town, though, they got some minutes and did nothing to improve their chances of getting into the rotation. Barnett, a 6-foot-6 freshman wing forward, went 0-for-6 from the field in 8 minutes.  Barnett is still struggling to hit shots from the corner pocket — which was supposed to be his shot. Croaker splashed an early three then disappeared. He finished with a team-worst +/- of -7 in just 4 minutes, including a bad shot on 3-point heave that no one expected — drawing the ire of Barnes.

Sophomore guard Kendal Yancy is stepping up at just the right time. He was the most efficient Longhorn guard Tuesday night, notching nine points on 3-of-5 shooting in 30 minutes. His +17 was the best on the team as the offense seemed to thrive while he was playing. Since sophomore guard Isaiah Taylor went down, Yancy’s minutes have more than doubled, and he’s made the most of them.

Starting junior center Cameron Ridley recorded only two rebounds against UT-Arlington in just 17 minutes. That’s two more rebounds than he got at UConn. He’s found his way to the bench, as Barnes goes to Turner more and more. Ridley’s disappearance isn’t a result of foul trouble either. Yes, UTA did have a smaller lineup on the floor, but Ridley still got three early touches deep in the post and didn’t do much with them.