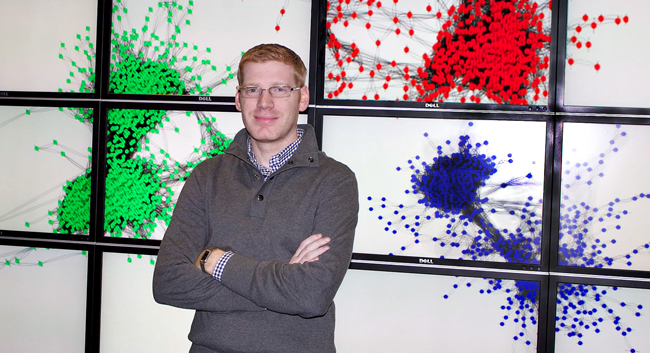 UT researchers have discovered a network of genes that could work together to help predict alcohol dependence.

Sean Farris, postdoctoral fellow at the Waggoner Center for Alcohol and Addiction Research, led the study. He said scientists focused on identifying one gene in previous research, whereas, as the study showed, it is actually a network of genes that work together to determine alcohol dependence.

“At the beginning of our study, we sought out to characterize changes in gene expressions of alcoholics in comparison to non-alcoholics,” Farris said. “These changes in gene expression may be due to alcohol and other factors — not just inherited genetic factors. Our approach was able to identify a co-expressed gene network associated with the lifetime consumption of alcohol.”

According to Farris, the study, published this week in the journal Molecular Psychiatry, involved the comparison of genetic code from brain tissue of alcoholics and non-alcoholics. Using this comparison, Farris said the researchers discovered a network of genes that co-expressed together in individuals that consume the most alcohol.

“This provides the most comprehensive picture to date of the gene sets that drive alcohol dependence,” said R. Adron Harris, director of the Waggoner Center, in a statement. “We now have a much clearer picture of where specific traits related to alcohol dependence overlap with specific expressions in genetic code.”

Farris said several researchers from the College of Natural Sciences contributed to the study, which the National Institute on Alcohol Abuse and Alcoholism supported and funded through the American Recovery and Reinvestment Act of 2009.

“We hope that with these findings we will continue with further research to develop a new treatment for alcohol abuse,” Farris said.