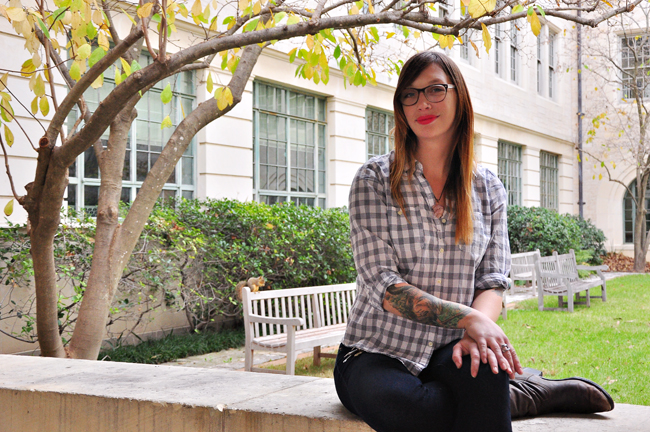 When writing graduate student Eva Suter steps into a darkened theater, she sees more than a stage and rows of seats; she sees a place where a kind of magic happens.

“Theater is the home of cheap magic,” Suter said. “Not like sleight of hand — but more the way that fishing line can make an object fly, or a person can transform into a whole other being in front of your eyes.”

Suter completed her undergraduate degree at Western Washington University and then spent time working in Portland before moving to Austin to study at UT’s Michener Center for Writers. At the center, she is a Master’s of Fine Arts candidate in writing with a concentration on playwriting.

“There’s something magical in the coming together of all the parts to make a play happen,” Suter said. “I like that what is on the page is more of a map to a place than the whole world contained.”

Suter’s play, “Hold Me Well,” will be showcased Thursday and Saturday as part of UT New Theatre, an annual presentation of work by third-year students in UT’s MFA in Playwriting program.

“Hold Me Well” tells the story of a group of women protecting a cooler containing the last hope for humanity’s future after a war wipes out the half of the human population with a Y-chromosome.

“[‘Hold Me Well’] started out as a bit of a project of stealing the plot from ‘Othello’ and combining with it influences from ’70s feminist science fiction and a slew of other things,” Suter said. “You throw a lot of things in the pot sometimes and stir it around and see what comes of it.”

Suter said she came up with the concept for her play the year before she moved to Austin.

“I read a lot of real science stuff, and I grew up reading science fiction,” Suter said. “Movies and vague memories of TV shows [influence me] as often as theater.”

Feedback from the director and actors has played a huge role in shaping the progression of “Hold Me Well,” according to Suter.

“Getting to be in the room throughout the process with this group of fantastic women has been an enormous gift,” Suter said. “The first moment when I got to say, ‘How do you think your character might say that?’ was important.”

Nicole Oglesby, a theatre and dance and English junior who plays the character Raquel in “Hold Me Well,” said a group effort went into producing
the play.

“There are some very intense moments in the play that have challenged us as a group,” Oglesby said. “We are all really passionate about the work and eager to work together to make ‘Hold Me Well’ as beautiful as it can possibly be.”

MFA playwriting alumna Katie Bender, the director of the play, said the cast and crew have a bond with the play itself.

“[We] are all figuring out the story in the room together,” Bender said. “I think we all feel an investment in the piece that we might not feel if we had been working on Shakespeare or Chekhov.”