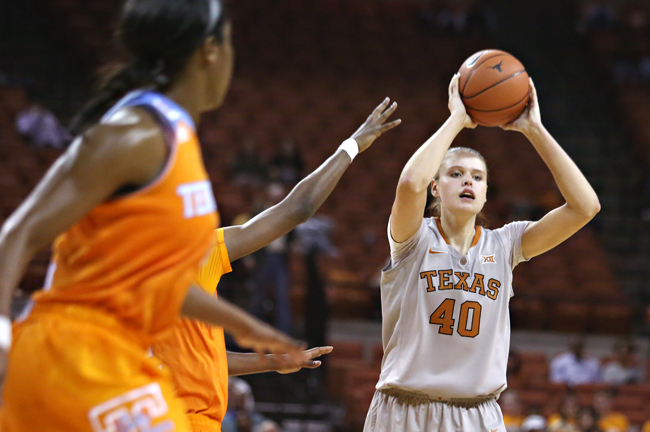 The fourth-ranked Longhorns women’s basketball team will continue its six-game home stand at the Frank Erwin Center on Wednesday at 7 p.m. against New Mexico.

Texas, now 5-0, ended a five-game losing skid against Tennessee with its win over the Lady Volunteers on Sunday.

For Enemkpali, there was only one more chance to break the losing streak against Tennessee.

“It feels amazing,” Enemkpali said. “We have to stay humble and remember this is just the beginning.”

“I have gained so much confidence because they have confidence in me,” Lang said. “I couldn’t do what I do without my teammates giving me the kinds of passes that they have been giving me.”

Head coach Karen Aston believes her players’ efforts are paying off, allowing a special era of basketball to unfold at Texas this season.

Texas moved up two spots to No. 4 in the Associated Press Top 25 on Monday. It is the Longhorns’ highest ranking in both polls since December 2008 (No. 4/4) after starting the season 11-0.

An injury report confirms junior center Imani McGee-Stafford is not cleared to participate Wednesday because of a leg injury.

Texas will put its win streak on the line against the 1-5 Lobos.