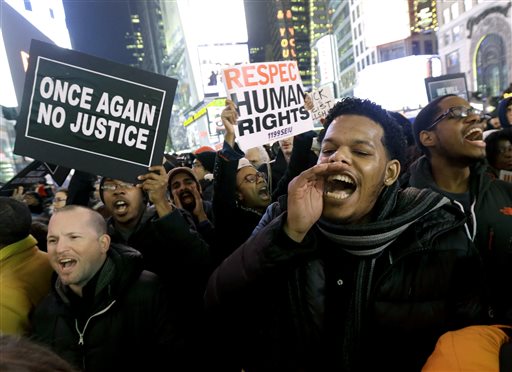 It used to be that this nation would get riled up over high-profile trials. The acquittal of individuals thought to be guilty in the court of public opinion stirred strong feelings. In the United States, the bar for conviction – that is, beyond a reasonable doubt – is rather high, making convictions, especially for some high-profile cases, difficult to attain. For all the griping and the moaning, most minds agreed that the legal system had run its course and worked.

Sadly, the same cannot be said today following two enormous miscarriages of justice in Ferguson, Mo., and Staten Island, N.Y. In Ferguson, as this paper has discussed considerably in the past, former Officer Darren Wilson killed 18-year-old Michael Brown, who was unarmed, by shooting him six times on Aug. 9. The witnesses’ accounts vary as to what exactly transpired ahead of the shooting, with some claiming there was a struggle between Brown and Wilson and others suggesting Brown was attempting to surrender. In Staten Island on July 17, Officer Daniel Pantaleo placed Eric Garner, another unarmed man, in a chokehold (banned by the New York Police Department’s policy), while attempting to take Garner into custody for allegedly selling untaxed cigarettes. This chokehold, paired with other officers pinning Garner to the ground and causing his chest to compress, led to Garner’s death, which is all on video. In both cases, the grand jury declined to indict the police officers for any crime, be it manslaughter or murder.

Unlike a conviction, indictments require relatively low burdens of proof. All an indictment means, in practice, is that the charge is not a frivolous one. And like so many other pernicious instances of our legal system failing, this dereliction of due process appears tied to race. The two police officers in question were white, and the two victims were black. Additionally, grand juries, which unlike petit juries are only comprised of willing applicants, are typically overwhelmingly old and white.

These decisions – or, we should say, indecisions – have set off discussions, debates and protests on campus and throughout the country about race relations and the role of law enforcement in the United States.

Mechanically speaking, there are some policy fixes that would help prevent tragedies such as these, as well as ensure justice is carried out when police brutality transpires. Democrats and Republicans, such as President Barack Obama and Dallas County District Attorney-elect Susan Hawk, have already announced their intention to appropriate money for ubiquitous body cameras for police officers, which would record interactions with the general public.

Studies have shown that the presence of these cameras reduce incidents where physical force is used, protecting both the officers and the community at the same time. However, sometimes – as in Garner’s case – a recording is just not enough. In those cases, we believe that structural changes are needed to the grand jury system in this country.

Here in Texas, the venal “key-man” system for picking grand juries, in which a judge picks one specific person to impanel the jury as opposed to selecting random names, needs to be abolished. State Sen. John Whitmire, D-Houston, has already introduced legislation to this effect, and we hope it gets its day in next year’s legislative session.

But the grand juries in Ferguson and Staten Island were not impaneled with the “key-man” system. Accordingly, we also believe that grand jurors should, like petit jurors, be summoned from the general populace instead of being volunteer-based. The terms for these grand juries would likely have to be shorter, but fairness in the system would increase remarkably.

There aren’t any silver bullets to solve racial animosity in this country. Fifty years on from the Civil Rights Act, we haven’t quite appeared as a country to move on from nasty prejudice.