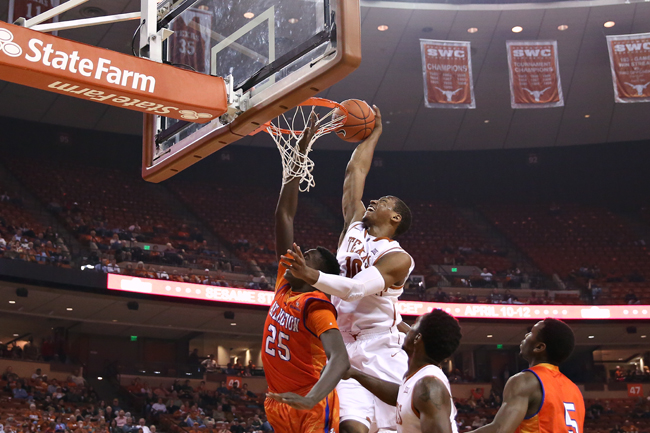 No. 6 Texas men’s basketball enters Friday’s matchup against No. 1 Kentucky fresh off its worst offensive performance of the season.

The Longhorns shot 30 percent from the field and 18.5 percent from beyond the 3-point arc in their victory over UT-Arlington on Tuesday.

For a chance to beat the Wildcats on Friday, those stats will have to improve.

“We understand if we [play like that] against Kentucky, we’re going to lose,” senior forward Jonathan Holmes said.

They’re experienced, too. After advancing to the NCAA tournament championship game to face Connecticut last season, the Wildcats saw most of their 2013-2014 roster return for this season.

The Longhorns and Wildcats match up well, as they are two of the biggest teams in the nation. Two of Kentucky’s better players, junior forward Willie Cauley-Stein and sophomore center Dakari Johnson, each measure in at 7 feet. Texas boasts five players of at least 6 feet 8 inches who see regular playing time.

“We go against some big guys in practice, so it’s not too much different from what we see every day,” Holmes said. “We’ll be fine going against another team that has some of the same size we have.”

Kentucky, however, figures to present some mismatch problems for a Texas team that’s missing its starting point guard. The Wildcats have enjoyed premier guard play this season from sophomore Aaron Harrison, who leads the team in scoring with 10.4 points per game, and standout freshman Devin Booker, who is tied for second on the team with 10.3 points per game.

So far this season, the Longhorns have racked up impressive wins over Iowa, California and Connecticut, but Kentucky presents their toughest test yet by far. The Wildcats beat then-No. 5 Kansas 72-40 on Nov. 18.

“What they did against Kansas was impressive,” Holmes said. “They deserve all the credit they’re getting right now.”

The Longhorns deserve considerable credit, too. They’ve won six of their seven games by double figures this year.

Both teams are 7-0 this season. A strong showing against the nation’s top-ranked team would go a long way in cementing Texas on the short list of the nation’s elite teams.