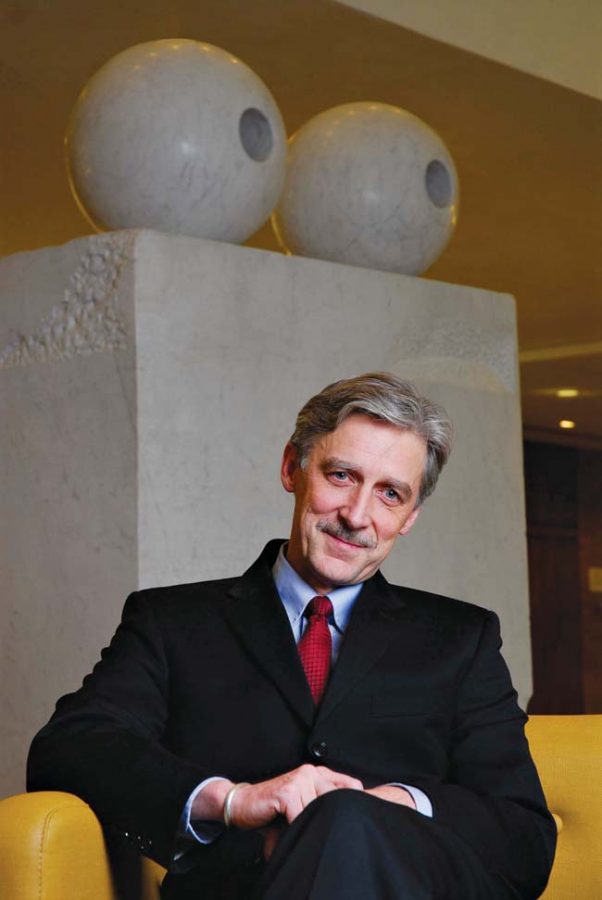 Editor’s Note: This is part of a series of Q-and-A’s with the deans of the University’s 18 schools and colleges.

The Daily Texan: Could you talk about some goals you have for the next year and some accomplishments you'd like to note from the past couple of years?

Douglas Dempster: One of our largest programmatic goals is to launch something we call the Center for Arts and Entertainment Technologies… It has a research component. We've got a Bachelor of Arts in Arts and Entertainment Technologies that is under review and we hope will be approved for the 2016 catalog. We're hoping to build a maker space in the fine arts library… for all students on campus. We're also engaged in a major facilities review, a 10-year facilities review of the college in hopes of improving some of our oldest and most antiquated facilities as a result of that. We're also doing a major review of our professional development initiatives and programs in the college so that we can think about better ways to prepare students for their professional lives after college. One of our major goals is to survive another year under the current budget circumstances without further drastic cuts to programs, faculties and services, but I remain very nervous and worried about that.

DT: What kind of appreciation do you feel like the fine arts school receives from not just the university, but from the regents and legislators? How do they interact with y'all?

Dempster: The University's been very supportive of fine arts. I feel throughout the University of Texas System, there's much greater emphasis on STEM fields. We have some very old, antiquated facilities that really hold us back as a college in different ways, and for instance, it's hard to imagine that the College of Fine Arts would end up being nominated for a tuition revenue bond… In this day and age, there's a lot of pressure on the STEM fields. Business, engineering, science, mathematics, and that's a larger cultural phenomenon. I think the fine arts are underestimated for what they bring to the economy, which is partly why we're creating this center on arts and entertainment technologies, which is all about commercialization of artistic and entertainment content and patents, because we're trying to make the point that our students move out into that commercial world as well, and that we shouldn't think that it's all about oil and gas and software technologies. It's a big marketplace, and the colleges that are contributing to the economy of Texas and the United States are not just confined to two or three colleges. I think the University has been generous to the fine arts, but the STEM fields are obviously getting a much greater amount of attention.

DT: How do you plan to work with the medical school?

Dempster: Dean [Clay] Johnston of the medical school feels very strongly about the role of design studies in health care and being more thoughtful about how we design not just our spaces — the architectural spaces — but also the interface with the public and the business practices, and we're building a much larger design program than we've had before, so there's a partnership right there… Design studies is an area where, one, it's very popular with students and two, it has very good employment prospects for students. Right now, our design program, I think it has about 60 undergraduate majors, but we turn away hundreds of applicants every year. There's something wrong with that picture.

DT: The music school froze the music business and recording technology program partially in order to start up the arts and entertainment technologies program?

Dempster: We're finding that we can't fund all of our initiatives. That's what it's coming to. We've been doing pretty well for about four years. This bad budget situation's been going on for four, now we're looking into five years, so I feel pretty good about how long we've hung in there with very little new revenue every year. The good news for y'all is that your tuition has been frozen for five years. The bad news is that we're really starting to see the effect on the quality and diversity of programs we can offer… How crazy is it that we have a music school in the middle of Austin that won't have a music business program? That seemed like a no-brainer, right? So it's really painful for me to imagine that we might not be offering that in some future, but we are at the point where we're having to make hard choices about what we can and can't do… I think the truth of the matter is that those programs, we launched, but our timing was terrible because we launched them right into the recession, and they've never been very well funded or well supported and they've struggled… There is not a decent recording studio in the music school. There is a recording studio, but it's about 30 years old. You can find a better recording studio at ACC… The [Butler School of Music] director, Dr. Poole, just made a very hard choice that we weren't doing a great job at this, it deserves better, and until we can do a better job, we need to pull back to what we're already doing well and try to revive these programs when we can do a better job.

DT: When students graduate, what do they generally do?

Dempster: About 40 percent of our graduates, at some time in their career, will make a living through teaching the arts. Much to my happy surprise, about 70 percent of our graduates are making some part of their living in the arts, and the rest are working the same place that all college-educated people go. Some become doctors and lawyers and bankers and nurses and you name it. They're doing all kinds of things. A relatively small number become celebrities in the arts. Oscar-winning actors, or Grammy award-winning composers or celebrated playwrights, but we know that that's a minority… Our undergraduate programs are largely liberal arts programs, with an emphasis in the arts, so our students follow all kinds of careers, but as a matter of fact, 70 percent of them stay in the arts in some fashion. [Fine arts] is what I would call a pre-professional major. It tends to orient people's careers in a certain direction without defining that direction for them.