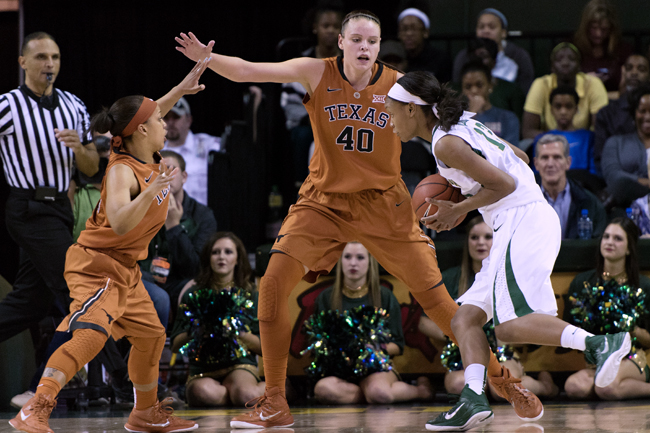 The women’s basketball team dropped its third game of the season Monday with a 75-58 loss against No. 3 Baylor.

Texas battled to lead the game early in the first half but soon faced a 9-point deficit. The Longhorns cut the lead to 3 points with less than four minutes remaining in the first half, but Baylor extended its first-half lead to 35-22. Baylor never looked back as the Bears shot at 43 percent.

Baylor totaled 41 rebounds compared to Texas’ 37. The Bears became the first opponent to outrebound the Longhorns this season.

Baylor was the Longhorns’ third opponent in the past six days. But the Bears have won the last nine meetings against the Longhorns, including the last five in Waco. Texas is now 3-1 this season against top-five opponents.

Over the holiday break, Texas found continued success from its early season wins. The Longhorns started the season 13-0, completing their non-conference schedule undefeated for the first time since the 1986 championship team.

In the latter half of its non-conference campaign, Texas overcame an 11-point second-half deficit against rival and then-No. 4-ranked Texas A&M to win, 67-65, on a game-winning layup by junior guard Empress Davenport with only seconds remaining.

But the team’s undefeated record came to a halt last week against Iowa State in Ames, Iowa. The Longhorns led by 13 at halftime, but the Cyclones shot 52 percent in the second half and outscored the Longhorns, 35-20. Enemkpali tied up the game at 57 from the charity stripe with 42 seconds left in regulation. But Iowa State guard Seanna Johnson scored with a layup to give the Cyclones a 59-57 lead and the victory.

Four days later, the Longhorns traveled to Oklahoma to get back on the winning track. However, Texas had its worst shooting performance of the season, shooting 26.2 percent from the field. With four minutes remaining in the first half, Texas led by 8 points before Oklahoma regained the lead going on to win 70-59.

In both losses, Texas shot a combined 29.4 percent from the field.

Despite the recent losses, Texas rebounded at home against Texas Tech on Saturday for a 55-44 victory. The win stretches the Longhorns’ home winning streak to 13 and marked the first time all season the team had a full, healthy roster.

The Longhorns look to rebound from their loss to Baylor and extend their home winning streak Sunday against Iowa State
at 3:30 p.m.

Senior forward Nneka Enemkpali suffered a left knee injury late in the first half. She was helped into the locker room. Texas athletics announced she will undergo further testing in Austin this week.