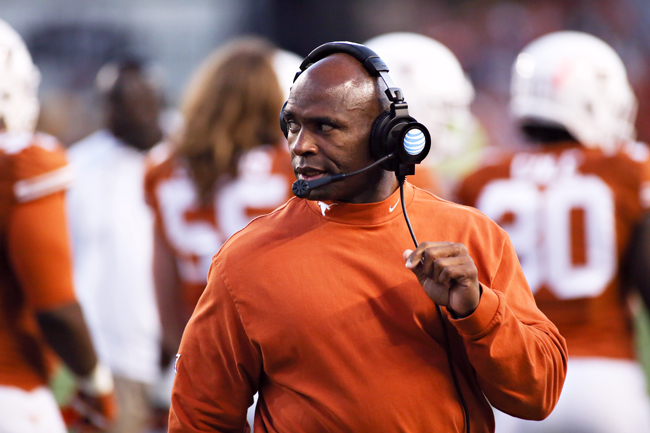 At his weekly press conference, a little past the halfway mark of the season, head coach Charlie Strong was asked what grade he would give himself for his season performance. He replied by saying he hadn’t done a great job.

At the time of the conference, the Longhorns were sitting at 3-5 after a 23-0 loss to Kansas State — the first time the team was shutout since 2004. After Strong’s comments,Texas went on to defeat Texas Tech, West Virginia and Oklahoma State by an average of almost 20 points. Then the streak came to an end: The Longhorns would end the season on a low note with blowout losses to TCU and Arkansas.

So now that the sting of the bowl loss has subsided, and the season has come to a close, let’s revisit the question: How did Strong fare in his first season on the 40 Acres?

If you asked Strong, he would probably answer the same way he answered the question earlier in the season: He hasn’t done a great job. But considering that this is a rebuilding season and that Strong had to lay the foundation for how he was going to run this team — which led to the dismissal of nine players and multiple suspensions — I don’t think it went all too poorly.

Let’s start by looking at the defensive side of the ball, where Strong had his greatest success. In former head coach Mack Brown’s final season, the Longhorn defense steadily improved, and Strong and defensive coordinator Vance Bedford only built upon that to develop a defense that stopped the vaunted Baylor offense and kept the Longhorns alive in almost every game.

Texas finished atop the conference in total and passing defense and third in scoring defense with 23.2 points allowed per game. Aside from the lapse against Iowa State, any failures the defense had came from the struggles of the offense and
special teams.

On offense, the team’s prospects took a dramatic turn for the worse when redshirt junior quarterback David Ash and senior center Dom Espinosa went out for the season in Texas’ first game. These losses forced sophomore quarterback Tyrone Swoopes into starting action before he was ready — especially given that he was standing behind an inexperienced offensive line. Still, despite those “excuses,” the fact of the matter remains: The offense failed to execute when it mattered most — apart from a few moments of brilliance, which came against the weaker opponents — and this is a spot that Strong and his staff are going to have to focus on throughout the offseason.

As for Strong’s final season grade, it would have to be somewhere around a C-plus or B-minus. Although this was the Longhorns’ first losing season since 2010, there were some moments when fans caught a glimpse of what the future could be — unfortunately, those moments came few and far between. If Strong can build off his first season with a full offseason of recruiting — and better instituting his style of play — a better report card may be on the horizon.