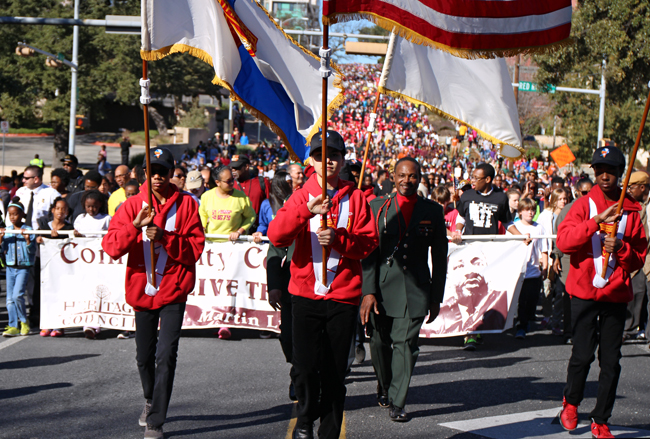 Thousands of students and community members gathered around the Martin Luther King Jr. statue in the East Mall on Monday morning to celebrate King’s legacy and call attention to a number of social justice issues, including police brutality against African-Americans.

Brenda Burt, a Diversity and Community Engagement officer, said at least 15,000 people walked in the annual MLK Day march from campus to Huston-Tillotson University. The event began with speeches from civil rights activists and concluded with a festival at Huston-Tillotson, a historically black university.

In his keynote speech before the march, Kevin Foster, associate professor in the Department of African and African Diaspora Studies, said police brutality is one of the most crucial issues facing African-Americans today.

“Our police are the most heroic when they don’t shoot,” Foster said. “That might sound like an odd thing to say, but the reality is they have been trained to be scared. We need to be developing the policies and programs to help [the officers] live into that greatest possibility. And the reality is that sometimes it’s difficult for them to not shoot because they do get scared.”

Foster said all people should work to protect the right to use video cameras in the event of an altercation and also promote the use of police body cameras. Many people of color still face police violence today, Foster said.

“If you are black in this country, we have never yet fully realized the possibility of a state that exists to protect us and to serve us and to have us live into the pursuit of happiness,” Foster said. “In fact, the reality has been that the darker your skin, the more likely you are to be shot while unarmed.”

Biochemistry senior Tia Scott, who attended the march, said she thinks African-Americans often fear they will be racially profiled by police officers.

“I think many African-Americans have an unspoken fear,” Scott said. “Maybe they don’t say it outright, but they think it. When a cop drives by, it’s just nervousness because it’s like, ‘Am I going to be treated unfairly, or am I going to be pulled over because I’m black or because I’m a black woman?’ I think there’s a general unspoken fear, and we shouldn’t be afraid of people that are supposed to protect us.”

President William Powers Jr. also spoke before the march and characterized Martin Luther King Jr. Day as a day of renewing the fight for equality. In his speech, Powers referenced recent protests in Ferguson, Missouri, which broke out after 18-year-old African-American Michael Brown was shot and killed by a white police officer in August, and protests in New York City, where Eric Garner, also African-American, died after a white police officer put him in a choke hold.

“If we look at Ferguson and New York, the poverty that still exists in our communities — the inequality — the dream has not yet been fulfilled,” Powers said. “So yes, today we celebrate a great man, a great legacy and a great dream, but, more important, is that we rededicate ourselves and our energy not just today, but every single day when we wake up — rededicate them anew to his dream.”