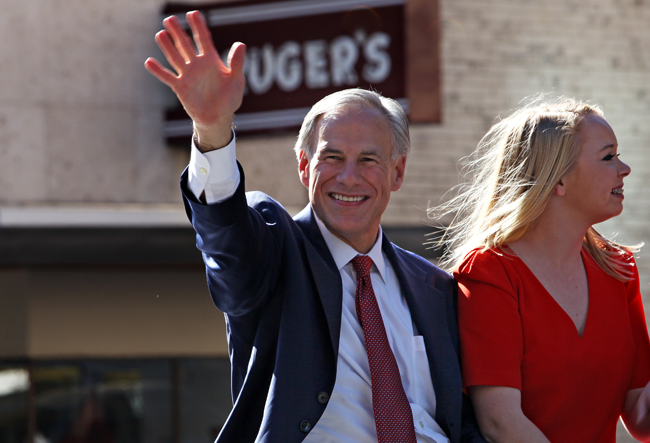 As Texans from across the state gathered at the Capitol to watch Gov. Greg Abbott and Lt. Gov. Dan Patrick’s inauguration Tuesday, the duo emphasized their goals of limiting government involvement in job growth and education.

“We will promote policies that limit the growth of government — not the size of your dreams,” Abbott said in his speech.

Abbott emphasized that he believes Texas must lead the nation in distancing state politics from federal influence.

“As governor, I will continue my legacy of pushing back against Washington — if they spend too much, regulate too much or violate our state sovereignty,” Abbott said.

Abbott said his path to the governor’s office was an improbable one.

“I am living proof that we are living in a state where a young man’s life can literally be broken in half, and yet, he can still rise up and be governor of this great state,” Abbott said.

According to Abbott, state leaders must focus on improving education — and unshackling education from overly restrictive federal control — in order for job growth to continue in Texas.

“These great minds will not be molded by a cookie-cutter approach of teaching,” Abbott said. “Instead, they will be the product of great teachers that recognize the value and uniqueness of each student.”

Patrick emphasized similar issues in his inauguration speech: border security, lower taxes, education and Second Amendment rights. He also said he would work to reduce the cost of attending college.

“In higher education, we must reduce the cost of skyrocketing tuition that is pricing many middle class families out of college and saddling students with huge debt upon graduation,” Patrick said.

Patrick also included a running call-and-response chant in his speech, continually asking the crowd, “What day is it?” and prompting the response, “It’s a new day in Texas.”

Some Texans, such as Ed Stein from Fredricksburg, drove hours to attend the day’s events.

“I hope that they live up to what they say,” Stein said.

The Longhorn Band also attended the ceremony, playing classic songs such as “The Eyes of Texas,” at the ceremony.

“It is an honor for the Longhorn Band to be invited to participate in historic events such as these,” Longhorn Band director Robert Carnochan said. “The fact that Governor Abbott is a UT alumnus makes it that much more special.”