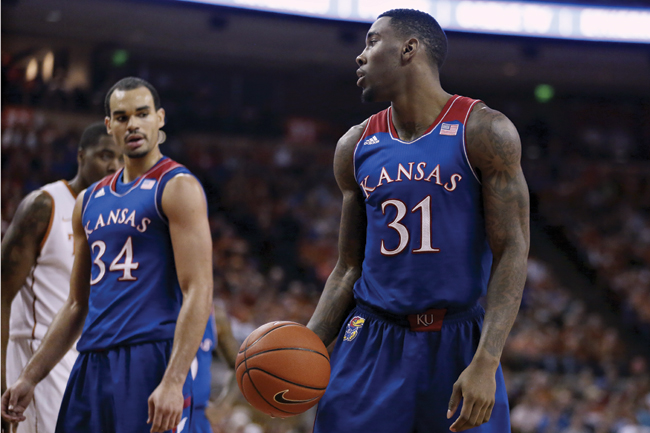 No free ride for Kansas

Last year, the Big 12 sent an NCAA-high seven teams to the tournament, and the conference is proving its depth once again this year. The Big 12 ranks first in RPI and has six top-25 teams appearing in the latest AP poll, with nine of the 10 teams being ranked or receiving votes this season.

During the first few weeks of conference play, the Jayhawks were tied for first in the Big 12 after signature wins against Oklahoma State, No. 21 Baylor and No. 19 Oklahoma. Although they have succeeded thus far, Kansas has a tough schedule ahead of them featuring seven matchups against ranked teams, three of which are road games.

Nevertheless, the Big 12 is Kansas’ to lose.

The victory was a notable home win for the Cyclones, who have won 31 of their last 33 games at Hilton Coliseum, and who boast a 10-0 home record this season.

The win was a key victory for the Cyclones, who have their eyes on a Big 12 title. The Cyclones will try to keep their momentum going with games against first-place Kansas State and Texas Tech this week.

After early struggles and a 7-6 non-conference record, Kansas State (11-8, 4-2 Big 12) was surging with four straight wins, including victories against No. 19 Oklahoma and No. 21 Baylor until their loss at Iowa State on Tuesday, 71-77.

Defense has been a key factor in the Wildcats’ recent success, as they have held each of their opponents to 63 points or fewer during their
win streak.

Although they were tied for first and had a chance to ignite their tournament push, the Wildcats’ momentum faltered after their loss to the Cyclones.

Oklahoma State’s hot start has come to a halt recently, as the previously ranked Cowboys (12-5, 2-3 Big 12) dropped three of their last four after starting the year 11-2.

While the Cowboys faced stout competition in January, with matchups against four top-25 teams, they struggled defensively, surrendering 63 points or more in conference losses, including an 82-65 loss against No. 19 Oklahoma in a rivalry game.

Despite the Cowboys’ recent setbacks, the team still has potential, with two of the conference’s top-three leading scorers: junior guard Phil Forte III and senior forward Le’Bryan Nash. They can get back on track with a win Wednesday night against last-place Texas Tech.