No offense, but lack of it hurts Texas’ title hopes 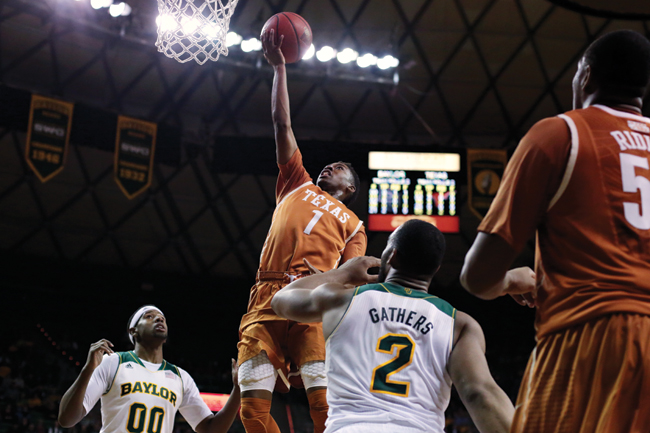 I think this team is good enough to win a national title.

That was my thought on Nov. 14, after Texas walloped North Dakota State on its opening day. And coming from me, that was saying something.

I’m often a tad pessimistic about Texas sports. Before the North Dakota State game, I’d predicted Texas football wouldn’t make a bowl game — although they ultimately squeaked one out. I didn’t think Texas baseball would sniff Omaha last season, and they finished a game away from the title. So my hopeful thought came as a surprise, even to me.

But sure enough, on opening night, I felt uncharacteristically hopeful for the Longhorns. The players looked confident, so I felt confident too. By the end of the night, I felt wowed.

To clarify, I didn’t think Texas would win a national title — No. 1 Kentucky was the clear front-runner, No. 2 Virginia was solid all the way around and No. 5 Duke had the best player in the country. But I thought they could win. And that was something.

Two months later, I regret my venture into optimism.

Right now, I see a Texas team with way too many holes on a stagnant offense. The wings seem glued to their positions, as if they’re waiting for a dangerous pass around the arc. The bigs struggle to get open. Penetration is minimal. And worst of all, the team shoots poorly. In Big 12 play, the Longhorns are shooting an abysmal 38 percent from the field.

Since going down with an injury, sophomore guard Isaiah Taylor hasn’t been the same. Even he admits it. He’s scared of attacking the rim. That floater that was once so beautiful looks flat. Taylor’s drives are timid — they lack the boldness that originally made him great. Iowa coach Fran McCaffery called Taylor the most important player on the team, and when he isn’t playing at 100 percent, the Longhorns aren’t a factor.

Even their once-dominant defense has been exposed by Tech, Oklahoma and Oklahoma State.

Are the Longhorns dead in the water? Not quite.

The team is still strong on the defensive end, and since going zone for two full games — for the first time in head coach Rick Barnes’ 17-year stint — they’ve held good opponents to 49 points per game.

Junior center Cam Ridley has also been dominant as of late. Freshman standout forward Myles Turner has as pretty a mid-range shot as I’ve seen.

If senior forward Jonathan Holmes and Taylor both play at the level they demonstrated at the beginning of the season, this team can make a run. I don’t know about a title run — but a run nonetheless.

Texas State’s coach proclaimed about the Longhorns, “I see them as an Elite Eight team at least, unless they have a bad day somewhere.”

I wouldn’t be that bold.

The Longhorns are a possible Sweet 16 team right now.But it wouldn’t take much to trip them up.