Stat Guy: There is a block party at the Erwin Center 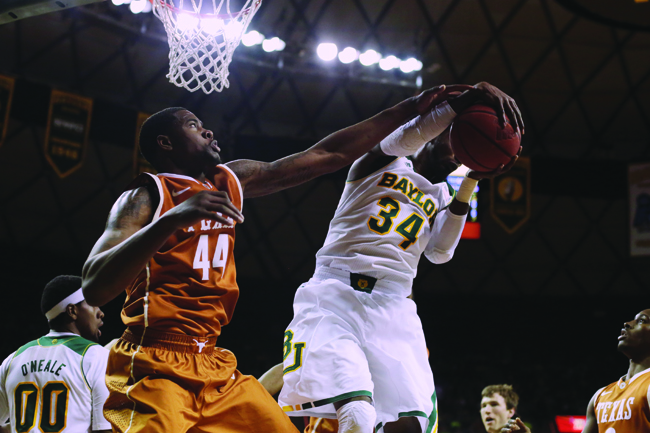 It’s no secret the Longhorns boast plenty of size this season — six of their 10 scholarship players are listed at 6 feet 6 inches or taller. Size in the frontcourt gave the team a fighting chance against No. 1 Kentucky on Dec. 5, and after a half of play, the teams entered the break knotted up at 26.

Ultimately, however, the Wildcats — who have 10 players 6 feet 6 inches or taller — were able to prevent the Longhorns from doing what they do best: block shots. Texas blocked a season-low one shot and allowed the Wildcats to pull away early in the second half and maintain their lead through a longhorn comeback at the end of the game.

This contest was an anomaly compared to the nearly eight shots the Longhorns have, on average, blocked per game this season. After Monday night’s game, they still lead the nation in blocked shots with 139 in 18 contests.

Sports-Reference’s advanced metrics on blocked shots estimate that 21.3 percent of the 2-point field goals attempted by Texas’ opponents have resulted in blocks, which is the best rate in the nation. Kentucky and UNLV are tied for second at 19.9 percent.

If Texas continues to reject opponents’ shots at this rate, the Longhorns will finish the season with the highest Sports-Reference block percentage since 2009-2010, when Mississippi State finished the season at 23.6 percent.

Leading the blocking charge is freshman forward Myles Turner, who swats 12.2 percent of opponents’ two point attempts when he is on the floor. That number leads the conference among qualified players.

Through 18 games Turner has blocked 48 shots, giving him a promising shot of breaking the University record for blocks in a season — 92 by Chris Owens in the 2000-2001 season — in what will likely be his lone season in Austin.

Turner is not the only player with a shot at setting a school record. If the team continues its current pace of blocking shots, it’ll easily shatter the program record of 206 set last season. Overall, this team has rejected 13.4 percent of field goals attempted by opponents, which is easily the highest percentage by a Texas team since the 1979-1980 season, when blocked shots were first recorded.

Solid interior defense is nothing new for a team led by head coach Rick Barnes — 12 of the 13 Texas teams that have blocked the highest percentage of opponent shots on record were teams coached by Barnes.

The Longhorns should get their hands on plenty of shots this Saturday when they host No. 11 Kansas Jayhawks, who have had 99 of their field goal attempts sent back this season — the second most in the nation.

Although the quantity of shots the Longhorns block does not really seem to correlate with whether the team wins — the team is averaging 7.25 blocks in losses and 7.86 blocks in wins — Texas has proven to be elite in that regard this season and is swatting its way into the record books.