Despite her upcoming career milestone, Aston will miss Enemkpali 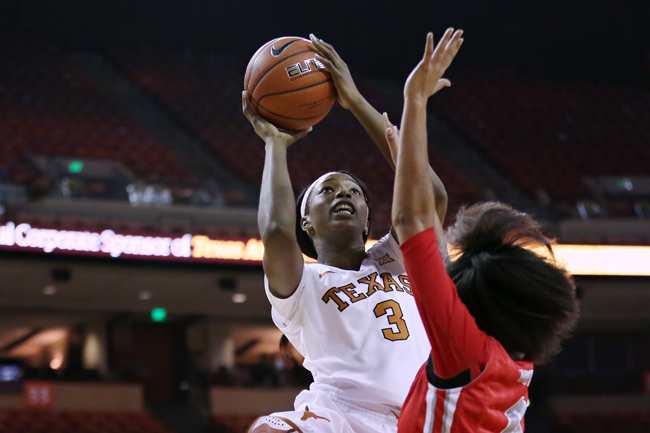 Regulars in the audience at the Frank Erwin Center know that women’s basketball head coach Karen Aston finds it hard to sit still, even in the best of circumstances. Aston can almost always be found squatting, pacing or bouncing around chairs on the sidelines — unable to contain her noteworthy enthusiasm.

Aston is only the fourth coach for the program and in her eighth season overall as a head coach. In Waco on Monday, her Longhorns attempted to earn her 150th career victory — and fell short, largely because senior forward Nneka Enemkpali tore her ACL before halftime.

Aston is one of the best-known female coaches in Texas, and she’s on the brink of a great victory — but considering the Longhorns have lost three of their last four games, Aston’s upcoming career milestone is probably not her focus. And as a decorated Longhorn coach, Aston can be certain her day will come soon.

What Aston is focused on is Enemkpali, whose injury represents a much more urgent concern for the team as a whole.

Enemkpali has been on a hot streak lately, a large part of Texas’ 13-0 start to the season. As Aston worked to rebuild the program, she relied upon Enemkpali, an All-American candidate and Big 12 leader in rebounds.

Before her injury early in the game Monday, Enemkpali co-led the team with sophomore center Kelsey Lang at six rebounds each — but her ACL injury means her season is over.

“It is never easy to see a student-athlete’s career cut short like this,” Aston said. “My heart goes out to Nneka because she has grown so much during her career at the University of Texas.”

Aston, whose 150th victory is just around the corner, said she hopes Enemkpali will be by her side to watch when the Longhorns return to action.

“Nneka has been the heart of our program for quite some time, and, as we move forward, she will continue to play a vital role on this team from the sidelines,” Aston said.

The Longhorns have won 13 consecutive games at the Erwin Center, but going forward, Enemkpali will not be able to rebound and assist. When Texas faces off against Iowa State in Austin on Sunday, it will do so without its veteran forward. Iowa State defeated Texas earlier this season with a 2-point lead at the buzzer.

Enemkpali ends her collegiate career ranked ninth in total rebounds, 30th in total points for Texas, and currently holds first place in the Big 12 for rebounds.