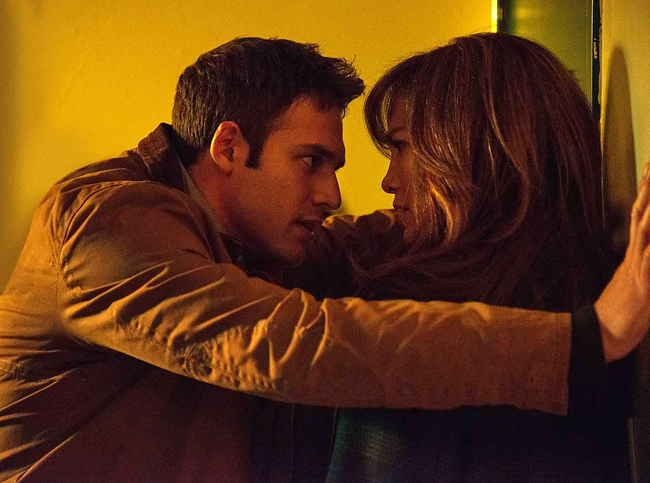 “The Boy Next Door” bills itself as a thriller. But it isn’t — it’s a bad counterfeit of one. The characters are bland stereotypes of common thriller tropes that lack anything resembling depth. Every twist and turn is predictable. Any of the common flaws present in bad thriller films, such as senseless characters, are exaggerated.The senseless characters and other common flaws in bad thriller films, are not just present, but exaggerated.The film wants to be taken seriously, but that’s a hard feat when the film is inherently humorous because of its poor production.

English teacher Claire Peterson (Jennifer Lopez) is recovering from the bombshell of her husband Garrett’s (John Corbett) affair. Slowly, she attempts to regain a sense of normalcy in her life for the benefit of her troubled teenage son Kevin (Ian Nelson). Everything changes, however, as the young, attractive new neighbor Noah (Ryan Guzman) arrives. Noah instantly entices Claire, despite their drastic age difference. Although the two share a passionate one-night stand, Claire’s sense of guilt causes her to regret her own affair, but the sociopathic teenager is not so willing to let go.

Director Rob Cohen and screenwriter Barbara Curry fail to give the characters in “Boy” any survival instincts. Sure, it’s easy to forgive the vulnerable Claire for sleeping with a hunky teenager, but, when she never once considers calling the police about Noah’s psychotic antics, any feeling of authenticity in the film evaporates. When Noah starts to influence Kevin by manipulating his view of his father during an emotional divorce, Kevin illogically forsakes his family in favor of his new neighbor, whom he has only known for a week. Nelson’s uninteresting character makes this unrealistic plot point all the more alienating to the viewer.

The actors aren’t convincing enough to pull off these already weak characters. Lopez hardly expresses any sense of terror when her stalker’s attacks grow more violent and outlandish, and she never even thinks to inform the police. Guzman is not the least bit intimidating, and his attempts to be unnerving are unintentionally funny. Nelson’s and Corbett’s characters don’t bring anything positive to the story. Kristin Chenoweth’s poor performance as the high school’s vice principal and Claire’s friend is annoying, and her attempts at comic relief fall flat because of Curry’s uninspired script.

There’s little suspense in this thriller — I never felt afraid for any of the characters — and the film does little to show the ramifications of stalking. Instead, any scary moments are relegated to a couple of cheap jump scares. Cohen and Curry aren’t interested in providing terror or fear, but they sure love sex scenes. If their goal was to convince audiences that Lopez and Guzman look spectacular without clothes, then mission accomplished. Many of the sex scenes are more gratuitous than a thriller film truly warrants, and they seem concocted for shock value and a more-adult feel in a film about a teenager stalker.

The dialogue is cringe-worthy. From the opening minutes, it’s clear that Curry dived eagerly and deeply into the book of thriller clichés — such as when Claire has to save her family from the stalker’s grasps and when Claire has to sneak into her stalker’s house. The worst offense occurs when Claire and her stalker, Noah, are actually intimate. It’s as though they took it upon themselves to improvise ridiculous romantic lines.On the surface, “Boy” serves as a bad movie that’s fun to laugh at. Lopez fans will get their fill, and anyone interested in seeing skin will leave satisfied.Those wanting a compelling thriller with interesting characters and an intelligent plot will be sorely disappointed.

Watch the trailer for "Boy Next Door" now: