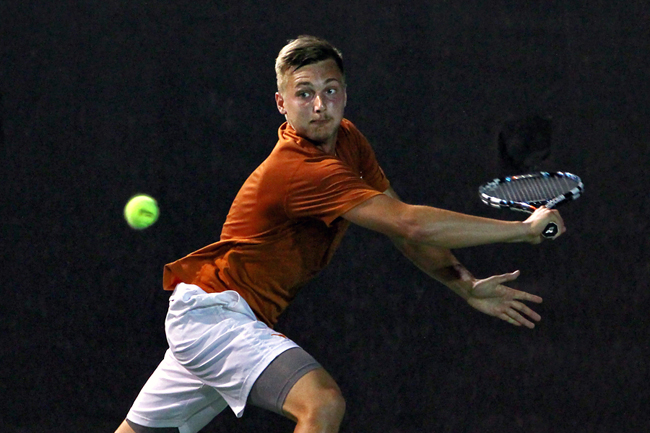 The No. 9 Longhorns men’s tennis team will host the ITA Kick-Off Weekend at the Weller Indoor Tennis Center this weekend.

The Longhorns need two victories in the ITA Kick-Off to qualify for the ITA National Indoor Championship, which will be held in Chicago from Feb. 13-16.

Texas is one of 22 universities selected to host the start of the 2015 spring season. In the current system, three visiting schools travel to a host team’s courts for a four-team tournament.

Coming off consecutive road victories against No. 41 Tulsa and No. 58 Arkansas, the Longhorns look to build on their 2-0 start when they face No. 49 Minnesota, No. 34 Florida State and No. 42 Michigan.

Hess-Olesen and Berkowicz have a combined seven singles wins and eight doubles wins, and they enter this season ranked No. 13 and No. 48, respectively. They are 1-1 together in doubles play.

Naumann and Mee, who hold a 4-0 doubles record, could also face Minnesota’s senior Leandro Toledo and freshman Felix Corwin, who are ranked 58th in doubles.

Freshman Adrian Ortiz-Ruiz is also off to an impressive start. Ortiz-Ruiz, a Mexico native, picked up his first career dual match singles
victory against Arkansas and currently holds a 3-2 singles record.

Junior Michael Riechmann holds a 4-1 singles record. He and Ortiz-Ruiz have a 2-2 doubles record as partners.

Senior All-American Lloyd Glasspool and sophomore George Goldhoff will remain on the sidelines during this tournament because of minor injuries, but they went undefeated at the UT Invitational in both singles and doubles play earlier this month.