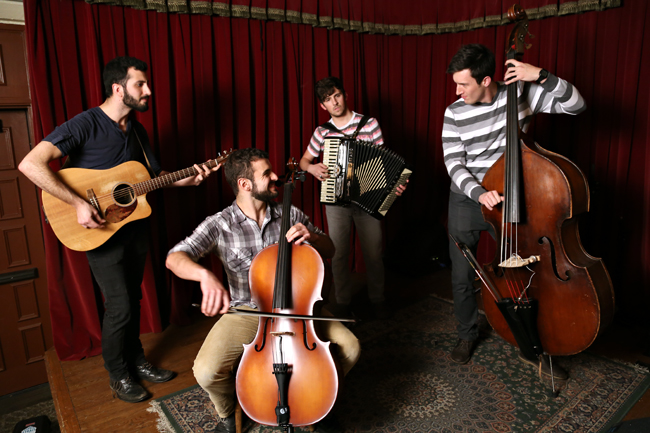 When brothers Luis and Nick Soberon decided to name their alternative folk band Sons of Santos, they weren’t just aiming for alliteration — they also hoped to honor the man who first got them interested in music. Santos Soberon, the boys’ father, was the one who taught them how to play.

The brothers settled on the name after performing at Mellow Mushroom while their band was still nameless. When they asked the audience for band name suggestions, one listener proposed the boys dub the band after their father — and Luis and Nick quickly agreed.

Although Luis, a UT law student, and Nick, a biomedical engineering senior, initially kept their band a duo, Sons of Santos eventually expanded to include the brothers’ high school friend Tré Carden, a University of Notre Dame visual communication and industrial design graduate. They met the fourth and final member of the band, Mason Hanmaker, jazz and performance neuroscience senior, after meeting him at a gig.

In 2013, Sons of Santos released its first EP, “Wounded Healer,” and the group now has its sights set on a new record with a more focused sound — the band members describe their style as “Andrew Bird meets the Punch Brothers.”

Listen to Sons of Santos perform "Toxic" by Britney Spears:

“We’re in the very early stages of figuring out a new record,” Carden said. “We were such a young band when the EP came out; it felt scrapbooked together. But after we went on tour and were shoved together in a little truck, it let us grow closer as a band. It did a lot to make us a more cohesive unit.”

Spending time away from home allowed Sons of Santos to reach new audiences, and being on the road meant the group had time to work on new material. As the band travelled from Austin to Athens, Georgia, the members worked on blending their different musical styles into one cohesive sound. Between Hanmaker’s training in jazz and Luis’ wide-ranging musical background — when pressed, he admits he was part of a punk rock band in high school — the band was able to draw influences from a number of different genres.

“It’s like a melting pot,” Hankamer said. “We have different backgrounds; we have different playing styles. Tré is more subtle. Nick shreds his cello. Luis plays more aggressively. And those different things make up our sound.”

Despite their differences, the boys share one thing in common — they all call Beaumont their childhood home. Carden, who made frequent trips between Beaumont and Austin before moving to Austin permanently for the sake of the band in June, said the band draws inspiration from both of their home cities.

“Austin has helped me grow immensely as a musician,” Luis said. “There are so many great musicians here that you’re constantly inspired, but you’re also constantly challenged to be better as a musician.