Notes from Texas’ loss to Kansas 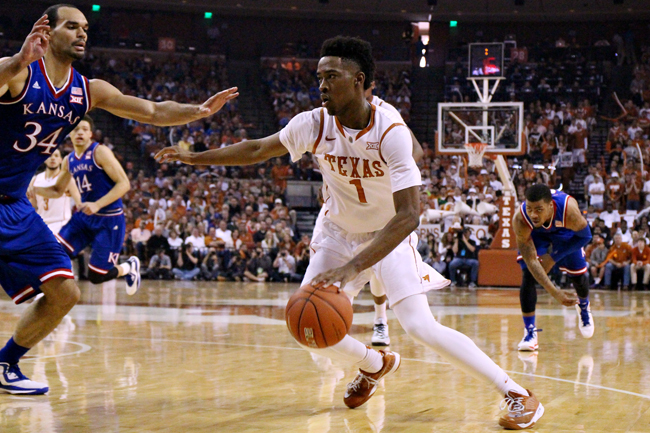 No. 17 Texas fell 75–62 against No. 11 Kansas on Saturday — the team’s second home loss in the first half of conference play. This defeat puts the Longhorns at 3-3 in Big 12 play before their upcoming trip to Ames, Iowa, to take on No. 9 Iowa State on Monday. Here are a few notes from Saturday’s loss:

Since suffering a broken left wrist, sophomore point guard Isaiah Taylor hasn’t looked like the player who was torching teams as a freshman last year — at least not until Saturday. Taylor finished the night with 23 points on 8-of-17 shooting. He fearlessly attacked the rim and, from the beginning, looked in control of the game. He also added five rebounds, while committing just one turnover.

It’s hard to win games when the team can’t shoot, and that’s what Texas head coach Rick Barnes had to work with Saturday. Texas finished just 3-of-18 from deep, and that’s not even counting the number of long two-point jump shots that couldn’t find the bottom. Junior guard Javan Felix, one of the Longhorns’ better shooters, shot 0-of-6 from the field. Sharp-shooting recruits Kerwin Roach and Eric Davis can’t hit the 40 Acres soon enough for Texas fans.

No help from the bench

At the beginning of the season, Barnes’ team looked like one of his deepest yet. On Saturday, the bench had 8 points — all from freshman forward Myles Turner. Felix had zero. Sophomore guard Kendal Yancy had zero. Junior center Prince Ibeh had zero. Kansas, on the other hand, had 31 bench points.

While totaling 13 assists, Kansas committed a surprisingly low three turnovers — more impressively, the Jayhawks didn’t have any in the second half.

“Our offensive efficiency was the best it’s been all year,” Self said.

Texas didn’t turn the ball over much either — just nine times — but the Jayhawks didn’t need to rely on Texas turnovers to get points on the other end. They were working the defense with the pass and using the middle of the paint to get where they wanted.

“I’m disappointed in the fact we settled for so many jump shots,” Barnes said.

And that pretty much sums up his frustration with Texas’ inability to feed the post. It took seven minutes for Texas to even get a touch to a big man down low, which is what it should be doing all game long. Junior center Cam Ridley ended with just four shot attempts. For the Longhorns to beat high-quality opponents, they need to get the ball down low, and Taylor knows it.

“We got to do a better job of feeding the post,” Taylor said.