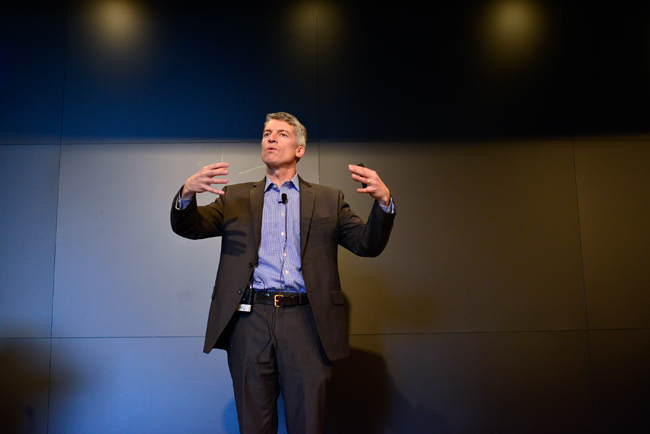 Clay Johnston, dean of the Dell Medical School, called for a health care revolution in a speech Friday at the AT&T Executive Education and Conference Center.

Johnston said he hoped to build a new health care “ecosystem” by shifting the industry’s focus to developing innovations in education and information processing. He said the health care industry should adopt the Lean Startup model, a plan that emphasizes preventative health care measures.

“We need experts in health care redesign and people who understand population health,” Johnston said “We can be much more influential by coordinating not just with the physician community, but with the broader community to get it to move forward.”

The McCombs Healthcare Initiative sponsored the event. Edward Anderson, director of the Initiative and professor at the McCombs School of Business, said Johnston’s vision of coordinating health care with the community could lead to a technology boom in Austin similar to that of the 1960s.

“We have the potential for doing, here in Austin, what was done back in the late ‘60s with high-tech manufacturing,” Johnston said. “It did great things for Austin and put Austin on the map. I think we’ve got a good shot, particularly with this mandate and this team, for making that happen again here in health care.”

Ahmed Riaz, creative director at Frog Design Inc., said Johnston had a positive message that applied to a variety of Austin professionals, including those outside the health care industry.

“He’s in a position to actually change things in the medical world and has a plan to create a system that involves the community,” Riaz said. “It really engaged Austin as a community and the society at large.”

“We want the medical schools here to enable the entire community to start thinking about being partners, envisioning better solutions and moving health forward,” Johnston said. “One of the best places to start that is here on campus.”

Correction: This story has been edited since its original publication. In his quote about a potential health-care boom in Austin, Johnston referred to a mandate, not a man. Further, he began his tenure in March of last year.