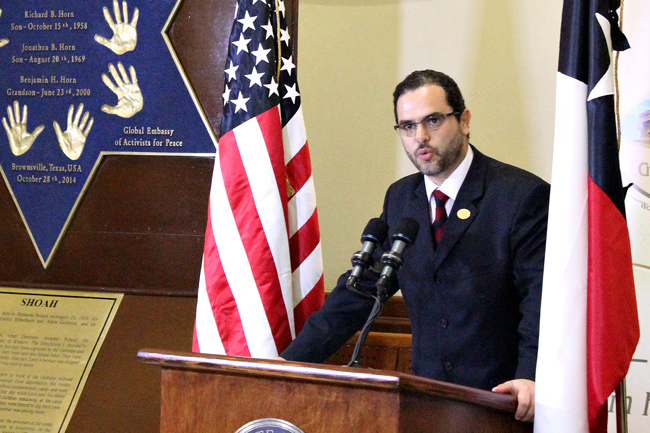 Members of the Global Embassy of Activists for Peace unveiled a plaque honoring Holocaust survivors in the Texas Capitol on Monday.

Lucio Jr. said the Embassy’s mission is to educate audiences about the consequences of World War II.

“[The Embassy’s] mission promotes peace to strengthen the principles of love through life, respect for human dignity, tolerance, equality, justice and solidarity, in addition to emphasizing the peaceful resolution of conflicts,” Lucio Jr. said.

The plaque is part of the “Traces to Remember” exhibit, which was previously housed at UT-Brownsville and will eventually move to different states throughout the country to promote world peace.

Bruno Harden-Cooper, regional coordinator of the Embassy, said the Holocaust are used to represent all acts of genocide.

“There are many aspects for things that you can bring out, and people can learn from [The Holocaust],” Harden-Cooper said. “We put it as a symbol for intolerances, disrespect, racism, lack of love.”

William Soto Santiago, global ambassador of Activists for Peace, said the exhibit plays a role in educating people about the harmful effects of intolerance by presenting the Holocaust as an example.

“Victims of this genocide were not a single group,” Soto Santiago said. “The Holocaust was an attempt against humanity because countless members of other minorities were also murdered. For that reason, the Holocaust will always be a warning sign and prevention for the entire world.”

Harden-Cooper said future destinations for the exhibit have not yet been determined, but he hopes to see it displayed at the White House or at UT-Austin. He also said he would like to bring representatives from the organization to speak at UT about the Holocaust.

“We’re looking at the opportunity to bring it to the University of Texas at Austin, but we haven’t done the connection yet,” Harden-Cooper said.

At UT, students can study World War II and the Holocaust as part of the Normandy Scholar Program. The program is an intensive World War II studies program that takes place each spring semester and provides an opportunity for students to study the causes, conduct, consequences and contemporary representations of the war.

“What education can do is provide an understanding of the complexity of the past and how it influences current events today,” Wynn said.

Wynn said it is important to learn from mistakes of the past, but it is also important to remember that the past and present are different. He said it is dangerous for government officials to make policy decisions today based on past events.