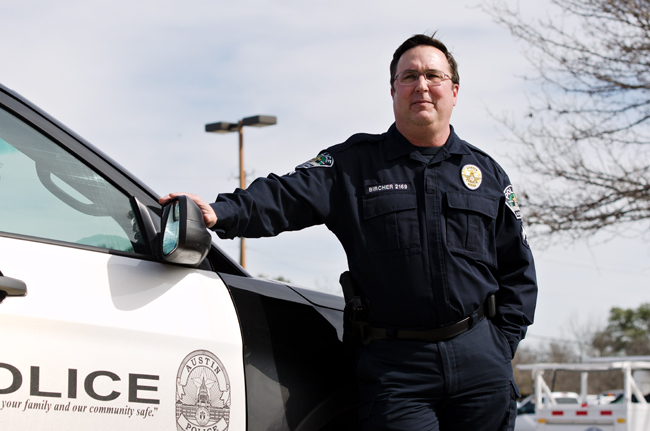 When taking a break from the daily responsibilities of policing, a group of Austin Police officers play drums and bagpipes in funerals, parades, festivals and community events.

After listening to bagpipes artists at an officer’s funeral, APD Detective Todd Bircher began practicing the instrument on his own. Five years later, he formed the Austin Police Pipe and Drum Corps.

Bircher said the police community did not immediately celebrate the idea of a departmental pipes and drum corps.

“You know, down in Texas and the South, [bagpipes are] not around — that’s northeast stuff,” Bircher said. “It was a little bit of a sell, especially among the more traditional Texas officers.”

Once the idea of bagpiping caught on, the group quickly expanded to include firefighters and emergency medical technicians, as well as members of police departments from across the state. All together, the statewide group calls themselves the Emergency Services Pipe and Drum Association. Bircher plays as a pipe major for the APD corps and a bagpiper for the state association.

James Gray, a Fort Worth Police officer and member of the state association, said his interest in playing bagpipes stemmed from a visit to the national police memorial in Washington, D.C., where he watched live performances from other pipes and drums bands. Gray said he purchased a set of bagpipes and began practicing to join the association as soon as he returned to Fort Worth,.

Gray said the performances are about more than just the music — they’re about giving back to the community and making the police force more accessible in general.

“When we’re in our kilts, that’s a time that we’re there for the community … just to give back,” Gray said. “It gives people a chance to come talk to you about music. It gives them an opportunity to see that we’re just people too.”

Performing at the funerals of officers who are killed in the line of duty is the top priority of police pipes and drums corps, according to Bircher.

Bircher said the corps serves to honor fallen officers and provide comfort to those officers’ families.

“It helps give clarity and purpose to what would otherwise be a senseless death,” Bircher said. “For a family to see that tribute paid to those officers illustrates the purpose of what they did. They went out and risked their lives to keep the rest of us safe.”

Bircher said the band members have various levels of musical expertise. APD officer Geoff Sumner, who joined the group in summer 2013, said he studied music in college before becoming a police officer. He said mastering the bagpipes is a challenge he enjoys.

“Everybody honors a fallen brother in their own way, but I feel like, as a musician, the best way for me to do it would be to ceremoniously perform for them with the bagpipes,” Sumner said.

The bands also play for civic and holiday events, such as officer graduations, officer promotions and St. Patrick’s Day festivities.

“The most fun is probably St. Patty’s Day because that’s the one day a year we’re kind of rock stars,” Bircher said. “Every other day, we’re just guys wearing skirts, playing bagpipes.”