As shots fall short, so do Longhorns 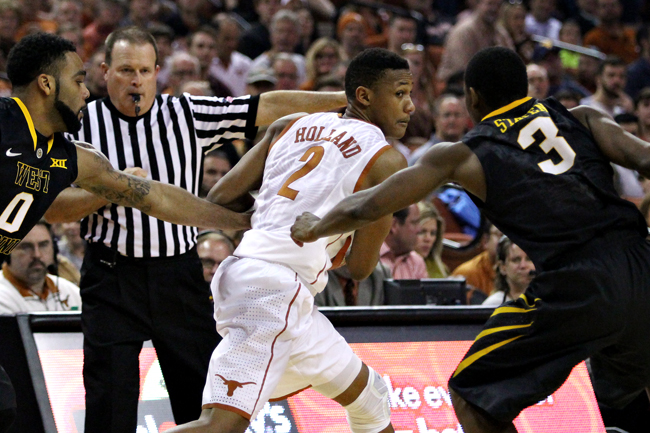 A late-game rally gave No. 19 Texas a chance at a comeback, but, eventually, the hole was too much for the Longhorns to overcome in their game against Iowa State Monday night.

No. 15 Iowa State manhandled Texas most of the way in Ames, Iowa, giving the Longhorns their second straight conference loss. Iowa State had no problem tearing apart the Longhorns, whether Texas was in zone or man-to-man defense, in the Longhorns’ worst defensive performance of the season, and the Cyclones went on to a 89–86 win.

The Longhorns (14–6, 3–4 Big 12) started the game in a zone defense that head coach Rick Barnes has relied on recently. That strategy collapsed as the Cyclones picked it apart in the first half on their way to a 36-point half — the most Texas had allowed in a half up to that point.

“We were way too conscious of the 3-point line,” Barnes said at halftime. “We didn’t make the adjustments, and we let [Georges] Niang get in the middle. We can guard them in the zone, but we got to be quicker.”

Iowa State had its way with the zone, working a smooth high-low between juniors Georges Niang and Jameel McKay, as the Cyclones had 13 assists on 16 first-half field goals. By the end of the half, and after more than three games in zone defense, Barnes reverted back to his normal man-to-man defense.

Despite a vulnerable defense and lopsided loss that all but diminished Texas’ hopes of a Big 12 title, the Longhorns’ offense did finally start to look to the post. In the early goings, Texas remained patient with the ball as it let its big men post up inside — unlike in Saturday’s game against Kansas. The Longhorns relied heavily on 6-foot-11 freshman forward Myles Turner, who turned in his best performance in a half against a highly ranked opponent.

Turner finished with 16 points, showing off his quick release and good touch, and drawing the double team on almost all his touches.

Texas eventually turned away from that strategy in the final 30 minutes, partly because of its defensive woes and surprising accuracy from deep, and it was the sharpshooting that gave Texas a fighting chance in the end. After going 0–7 from deep in the first half, Texas made 10 of the last 15 en route to a 61-point half — its highest of the season.

Junior guard Javan Felix also turned in his best performance of the year off the bench, going for 20 on a perfect shooting night behind the arc. Sophomore point guard Isaiah Taylor added 17 points, with 15 coming in the second half, while senior forward Jonathan Holmes also added 17.

The Longhorns will look to get back in the win column in another Big 12 game Saturday at Baylor.