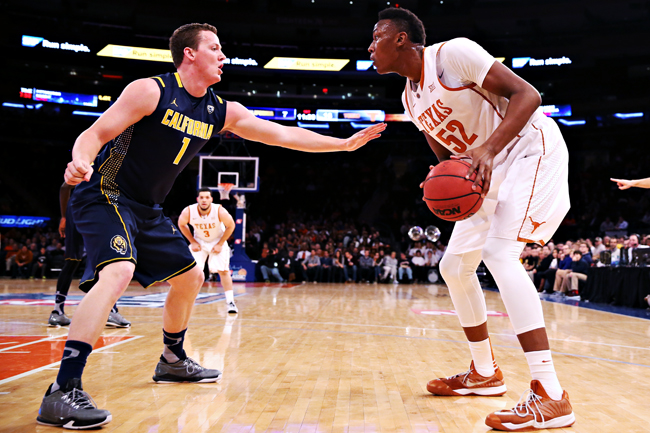 Against Kansas on Saturday, No. 19 Texas took nearly seven minutes to get the ball to the post. How do head coach Rick Barnes and his towering starting lineup go so long without feeding the highly recruited big men?

It seems simple. With one of the tallest starting lineups in the nation, the Longhorns should be pounding the post hard and often. Among 6-foot-9 junior center Cam Ridley, 6-foot-11 freshman forward Myles Turner and 6-foot-8 senior forward Jonathan Holmes, the Longhorns shouldn’t be worried about getting the ball down low, but about which one of their big men is going to score when they do.

Having a game plan and executing one are two different things, as Barnes has learned lately. He knows Texas needs to have more of an inside-out game. He’s enforcing it in practices. But he’s “baffled” as to why his players won’t do it in games.

“We’re one of the biggest teams in the country,” Holmes said. “I don’t think we take advantage of it like we should.”

“We’re not quite sure of our identity,” Barnes admitted.

More than midway through the season, that’s not ideal.

But for the first time in a while, Texas finally started looking to the post with a purpose Monday night. Turner got in a groove to give Texas an early boost. But as the game got away from the Longhorns, naturally, so did the inside-out game.

There are more advantages to working the ball down low than just points in the paint. It would open up many other opportunities, as many teams are prepared to double because of the height difference. Double teams down low could open up easier outside shots or lead to open drives for the guards.

Instead, the Longhorns have relied on shots from behind the arc, where — despite a 10-for-15 second half performance Monday — they are still shooting just .325 in conference play.

“I’m disappointed in the fact we settled for so many jump shots,” Barnes said.

With the Big 12 title hopes quickly evaporating, the players are starting to finally realize how costly their poor shot selection is, and they are ready to make adjustments.

“I got to do a better job of feeding the post,” sophomore guard Isaiah Taylor said.