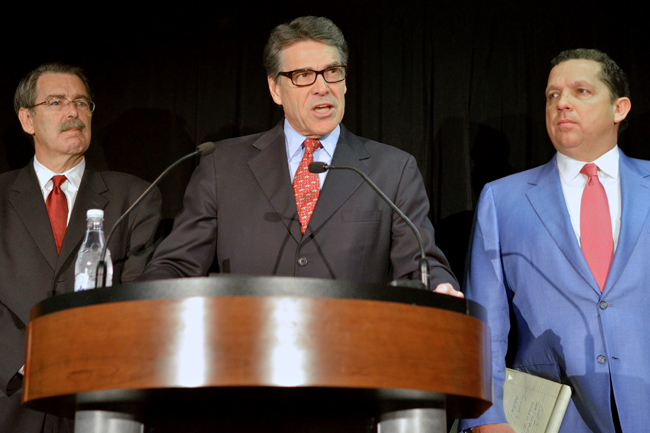 Former Governor Rick Perry said his recent indictment will not derail the possibility of a 2016 presidential campaign.

Perry discussed his future plans at a press conference Wednesday, which he held after District Judge Bert Richardson refused to drop felony charges of abuse of official capacity and coercion of a public servant against Perry. Perry said he will continue to contest his two felony indictments.

The indictments came as a result of Perry’s decision to veto funding for the Public Integrity Unit of the Travis County District Attorney’s Office. In June 2013, Perry threatened to veto the funding if Travis County District Attorney Rosemary Lehmberg did not step down from her position after her drunken driving conviction in April 2013. The former governor and his attorneys claim Perry’s actions because Texas law grants the governor veto power.

Richardson announced Tuesday he would not dismiss Perry’s charges. Richardson acknowledged that the first count against Perry, abuse of official capacity, was vague and needed to include the word “veto.” He said the second count, coercion of a public servant, needed to better explain how Perry coerced a public official outside his duties as governor. Richardson gave the prosecutors the opportunity to amend their case.

Perry’s attorneys, Tony Buzbee and David Botsford, said they will file a motion with Richardson to halt Perry’s trial, as well as file a notice of appeal in Texas’ 3rd Court of Appeals.

“We anticipate, due to the gravity of the constitutional issues involved, that the court will move swiftly and expeditiously,” Botsford said.

At the press conference, Perry said he believes he used his power of veto “lawfully and legally.”

“Under our constitution, every citizen has the right to speak their mind freely without political interference or legal intimidation,” Perry said. “This continued prosecution flies in the face of that protection.”

Lehmberg’s behavior was “embarrassing,” “unethical” and “inappropriate,” according to Perry, who said he stands by his original actions that sparked his indictment.

“Given the choice, I would make the same decision again today,” Perry said.

In a statement regarding Perry’s trials, Gov. Greg Abbott said he believes it is unconstitutional to prosecute Perry for vetoing legislation.

“The continued legal proceedings against
Governor Perry conflict with the authority granted to all governors by the Texas Constitution, and I trust they will be ultimately resolved in a manner consistent with the Constitution,” Abbott said in a written statement.

Attorney General Ken Paxton also released a statement supporting the former governor.“[Perry] has treated his office with dignity and respect … ” Paxton said in a written statement. “The Constitutional veto authority of the governor is an important and necessary tool to balance the powers of state government and must be utilized without undue fear of prosecution.”

Perry’s presidential campaign will be officially announced in May or June.