Weekend previews for swimming and diving, tennis and track and field 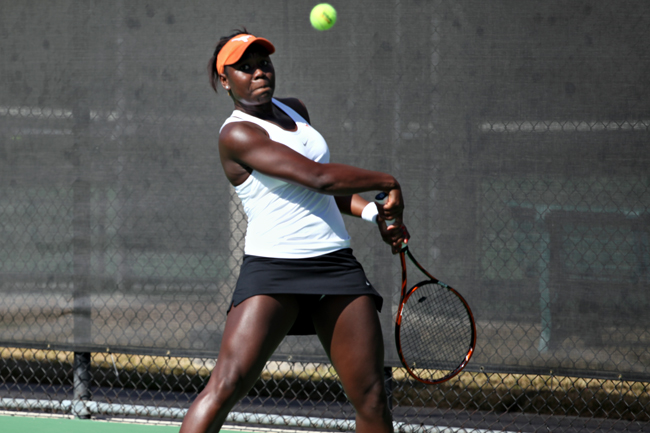 Each year, the Texas men’s swimming and diving team quietly climbs their way to the top — and this year should be no different.

The Longhorns have comfortably retained the No. 1 national spot since Dec. 11 and will look to protect their rank in this weekend’s double-dual meet against No. 14 Arizona and SMU.

In their last meeting with SMU, almost exactly two years ago, the Longhorns cruised past the Mustangs by a 76-point margin. And about one year later, Texas handed the Wildcats a defeat 194-153.

Most impressively, and most recently, two Longhorns earned international recognition. Sophomore Jack Conger secured the world’s best time in the 100-butterfly at the USA Swimming Arena Pro Swim Series with senior Tripp Cooper coming in a touch behind him with the world’s second best time in the event.

Texas takes to the water at the Lee and Joe Jamail Texas Swimming Center for this weekend’s meet at 5 p.m. on Friday and continuing into Saturday afternoon.

The Longhorns travel to Dallas this weekend to take on undefeated Southern Methodist University at the SMU Tennis Complex. Both teams are undefeated so far this season. However, Texas remains ranked No. 9 in the nation, while SMU is currently unranked.

Last season, the Longhorns cruised past the Mustangs in their season opener, winning by a score of 7 — 0. Junior Søren Hess-Olesen produced a strong performance — one of many from Texas during the match.

Hess-Olesen, a two-time All-American and reigning Big 12 Player of the Year, has been the catalyst for the Longhorns again this season. He has won his last six matches, including back-to-back straight set victories against No. 46 Minnesota and No. 33 Florida State.

Following Saturday’s match, Texas will have two more home matches before heading to Chicago for the ITA National Indoor Championship on Feb. 13.

After a shutout loss to Vanderbilt Sunday, No. 23 Texas women’s tennis (1–1) looks to redeem itself this weekend against Rice (1–2).

The match will be the first home contest for the Longhorns this season at the Weller Indoor Tennis Center.

Both teams started the season at the ITA Kick-off Weekend event last weekend, but neither team advanced to the National Women’s Team Indoor Championship in February.

The Longhorns defeated DePaul 4–3 before losing to Vanderbilt, earning them a second place finish in the four-team tournament. Rice travelled to Illinois but lost both matches and placed fourth.

Texas is the third of six consecutive top-40 opponents the Owls play this season, and Rice has yet to defeat a ranked team on the road.

At the top of the lineup for Rice is senior Natalie Beazant, who was ranked No. 24 in the preseason singles rankings. Two-time All-American sophomore Breaunna Addison will lead the lineup for the Longhorns.

The Longhorns are sending a small group — most of whom are sprinters — to the Howie Ryan Invitational in Houston, hosted by the University of Houston.

Texas will send its pole vaulters and throwers to Seattle for the UW Invitational, hosted by the University of Washington.

Junior All-American pole vaulter Reese Watson will have his hands full as he goes up against some of the best pole vaulters in the country. Three athletes who are currently in the top 10 will compete in the men’s pole vault.

Junior pole vaulter Kaitlin Petrillose, the defending NCAA champion, is currently ranked No. 9. Petrillose will compete against University of Washington’s Diamara Planell Cruz, who is ranked No. 22.