Texas gets down early, drops third straight to Baylor 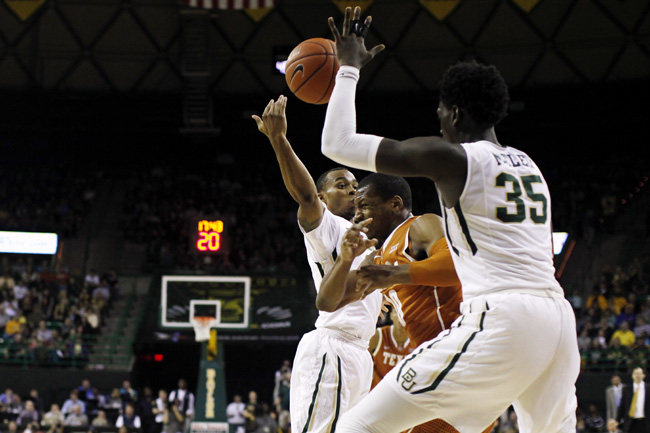 No. 19 Texas missed its first 12 shots. No. 20 Baylor made its first eight. From there, the Longhorns never made enough of a run to get back into the game.

The same issues that plagued Texas in its previous two games reared their ugly heads again on Saturday, as the Longhorns fell to the Bears in Waco, 83-60. The Texas big men struggled to make their presence felt against Baylor’s smaller frontcourt, while the defense did little to slow Baylor’s potent three-point barrage.

And now, with three straight losses, the Longhorns are wondering how to fix their bevy of issues.

“We’re just trying to figure out what we need to do to win games again,” senior forward Johnathan Holmes said.

Texas’ puzzling inability to exploit its size down low continued against the Bears. Freshman forward Myles Turner scored a career-low 2 points. Juniors Conner Lammert and Prince Ibeh combined for 0. And junior center Cam Ridley missed a series of easy lay-ups at the beginning the game that helped allow Baylor’s early lead to balloon.

The Longhorns attempted 26 three-pointers, making just five. Holmes was 1-of-7 from beyond the arc. Junior guard Javan Felix was 2-of-6. Turner, Lammert and sophomore guard Kendal Yancy went a combined 0-for-6.

But the Longhorns’ biggest problems were on defense. It didn’t even take four minutes for them to fall behind 12-0, and they trailed 21-9 by the time Baylor finally missed a shot at the 11:59 mark in the first half.

The Bears never let up. They shot over 48 percent from the field for the game, going 12-of-22 on three-point attempts.

“We just haven’t been good on defense,” Holmes said. “It doesn’t help when you’re not making shots on offense. It’s not good on both ends.

The loss dropped Texas to 3-5 in conference play, four games behind first-place Kansas. Chances at a Big 12 title appear increasingly unlikely with each loss, and while head coach Rick Barnes declined to say whether he believes his team has dug a hole for itself, he said he knows they need to turn things around.

“Where we are, we’ve got to turn it around,” head coach Rick Barnes said. “We got to win games. It’s simple. We’re not what we want to be. We’re not where we need to be. There’s a lot of basketball left. I think every night is going to be a challenge.”

Saturday’s 23-point loss was the worst of the season for the Longhorns, who have dropped four of their last six games after starting the season 10-1. Despite these struggles, Felix insisted after the game that nobody in the Texas locker room is giving up.

“We’re very frustrated,” Felix said. “No one likes losing. We’re down, but we’re not divided. We’re just going to stick together, and we’re going to get through this.”