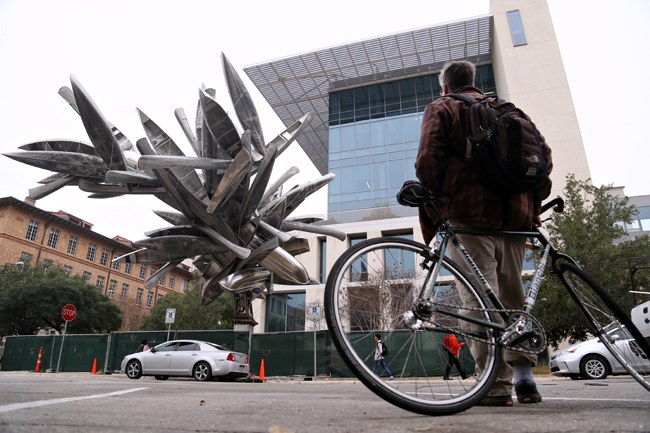 The latest sensational addition to Landmarks, the University’s public art collection, is Nancy Rubin’s Monochrome for Austin, a terrific sculpture by a celebrated, but challenging artist.

Installed on Speedway during the winter break, it follows recent Landmarks installations of Turrell’s The Color Inside and Sol LeWitt’s Circle with Towers, two equally spectacular works by luminary artists of the Minimalist era. Few other campuses or municipalities — or for that matter even art museums — can boast so distinguished a collection of public art as is now represented by the Landmarks collection on the 40 Acres.

Reactions to Monochrome for Austin range widely.  It’s a playful, puzzling explosion that inspires delight and wonder. It is also confrontational in ways that may provoke consternation or offense.

Monochrome for Austin falls conventionally into the tradition of 20th-century art that stridently defies conventional expectations about what is and isn’t art and what is and isn’t sculpture. It’s not a statue.  It’s not bronze.  It’s made of salvaged, conspicuously battered canoes and rowboats (though the rowboats are curiously shiny and new.) It’s not representational.  Its scale is exaggerated.  It does not perch securely on its plinth.  It gives the appearance of rough-and-ready DIY fabrication, with none of its mechanics hidden from view.

It’s everything we wouldn’t expect in public art.  That is if we were living in 1915 rather than 2015.  In our day, if you’ve been paying attention, none of these materials or methods are shocking novelties in art.

This gigantic spectacle of a work uses startling incongruities to unsettle and contradict our assumptions about public space and public monuments, about artisanship and accident, about space and motion and function and ornament.  Monochrome for Austin explores and inverts the relation between complex, emergent structure and underlying elements.

To take just one obvious incongruity — or maybe it’s an impropriety — the sculpture is located at a very public campus crossroad surrounded by earnestly serious academic buildings.  But unlike statuary or well-mannered, abstract modernist sculpture — sometimes called “Plop Art” — the work pays no deference to those buildings.  It’s not a discrete ornament in “their” space. It’s not a solemn memorial.

It crowds the space. It menaces the road.  It draws attention away from the buildings and serves as a dramatic counterpoint to their sobriety. It challenges them.  And us.  Where they project a blockish monumentality and permanence, the sculpture is an eruption frozen in space and time evoking energy and entropy.  The counterpoint dramatically heightens the aesthetics of the buildings and the space and the sculpture.  And that’s pretty cool.

Like much post-modern art, Monochrome for Austin uses enormous scale and prolific repetition to achieve surprising emergent effects that would not be predicted from its underlying elements.

But Monochrome for Austin playfully flips the molecular metaphor of imperfect, familiar, manufactured objects in our day-to-day reality resolving microscopically into the exotic perfection of atomic substructures bound by mysterious forces.  Instead it gives us a “what-in-the-world-is-that” macrostructure that resolves comically into a substructure of unmistakably familiar, cast-off canoes held together with wire and bolts.

Monochrome for Austin least of all asks for complacent acceptance. It would be a total failure if it did not provoke puzzlement, inquiry, challenges and even controversy. It’s a successful work — and maybe even a great work of art — because it rewards honest inquiry and controversy with so many rich visual interpretations and possible solutions.

The way we see and interpret the world is not a passive, hard-wired necessity.  We have enormous latitude about how we look at and see the world around us. Artists like Nancy Rubins bust up our visual contentment to remind us of that.

Monochrome for Austin is a thought provoking, debate-worthy work of art and a perfect choice for a public art program on the campus of a premier research university.  We’re enormously fortunate to have it, as well as the Landmarks program, on the 40 Acres, where the tide of rigorous inquiry raises all boats.

Dempster is dean of the College of Fine Arts.