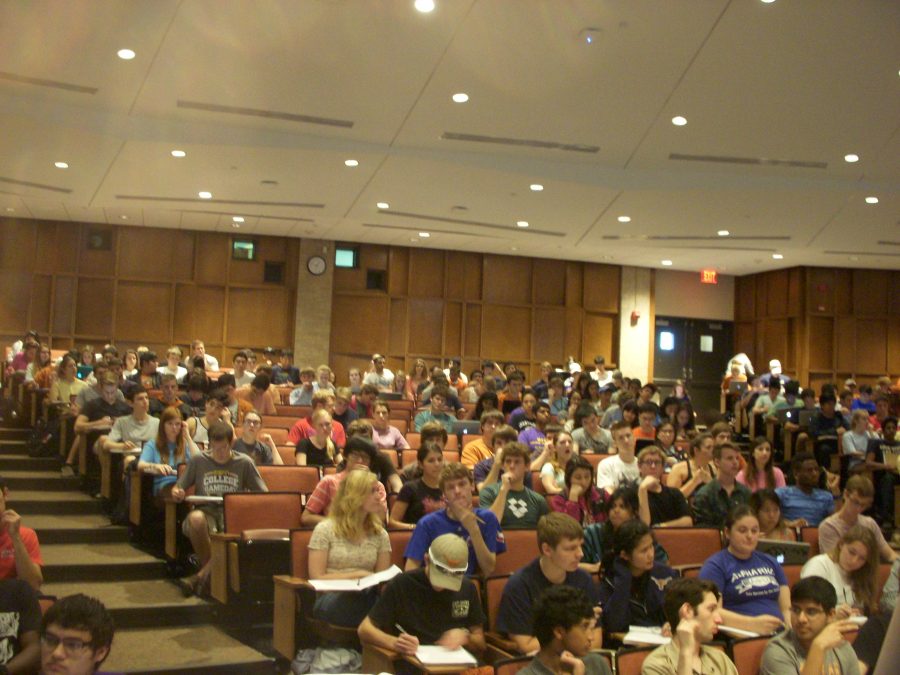 In a flipped classroom, professors post lectures online, which students watch before coming into class to discuss the material and solve challenging problems. In their more extreme iterations, flipped classrooms don’t include a classroom at all, giving students access to all lectures and assessments without requiring them to put on pants.

With tuition costs rising across the country and the UT System Board of Regents hell-bent on keeping Texas public schools at least somewhat affordable, online or flipped courses could provide an avenue for scaling back on some unnecessary classes. For instance, calculus lecture halls could be easily replaced by a single online course supplemented by in-person TA sessions, given that the math department offers a standardized assessment for all calculus students anyway. There’s already a precedent for that sort of system at UT in the form of the introductory government course, GOV 310L. And as far as I know, there are no complaints alleging that the online version of the class has led to a noticeable drop-off in the average student’s knowledge of the Constitution.

There’s also no grounding to the argument that lecturing online makes professors seem remote and inaccessible. That strikes me more as a shortcoming of individual lecturers than an indictment of the system as a whole. I’ve been in classes with 250 students that felt intimate and engaging, and I’ve been in tiny seminars whose professors would’ve failed the Turing test. A good teacher is a good teacher, regardless of how they convey their message. Steve Ballmer’s TED talks would be just as compelling in person, and Ben Stein’s economics lecture in "Ferris Bueller’s Day Off" wouldn’t have kept anyone awake even if it were offered on YouTube — unless students were bored enough to switch to a cat video before dozing off.

But any potential savings online classes offer in cost and efficiency are countered by some serious logistical concerns. Notably, there’s no adequate online replacement for class discussions. Professors can enable instant-messaging feeds during their lectures, as long as they’re interested in combining the enthusiasm of a lecture-hall discussion with the civility of an internet comment forum. That’s a set of terms and conditions no one should accept, and it renders the online system especially unviable for humanities or upper-division STEM classes which require careful analysis and discussion.

The problems are even more severe for the types of open-enrollment online courses that were once considered a game-changing addition to the world of higher education. Although anyone with an internet connection and some self-discipline can learn calculus from Khan Academy or ancient Mediterranean history from a few well-sourced Wikipedia articles, it's impossible to say whether or not the self-taught are actually learning anything because online classes don't provide great outlets for evaluation. It's tough to give a fair multiple-choice or short-answer test online without someone finding a way to cheat the system, and even tougher to assemble a team of TAs superhuman enough to thoughtfully grade thousands of papers. That would make any type of assessment at best unreliable, and probably unviable.

Plus, if UT is supposed to help prepare students for life beyond the Forty Acres, it should provide more than an introduction to debt and bureaucracy to go along with an excellent education. On the first day of an 8 a.m. lecture with mandatory attendance that I took last year, the professor announced that “90 percent of life is getting your ass out of bed." Unfortunately, he wasn't wrong. In spite of the proliferation of digital media, the modern world is still largely reliant on face-to-face interaction. There's value in learning that not everything is as conveniently accessible as a URL.

If UT eventually develops more Web-based courses, it would be well-served to do so on a closed system, with classes taught by UT faculty and open only to UT students. Until then, the remaining lecture-based courses that still require students to get their asses out of bed should probably adopt a hybrid system, offering some short lectures online and combining brief review with new material at the beginning of class. That provides struggling students with an opportunity to refresh themselves on anything they couldn’t learn beforehand without bogging the rest of the class down with redundancy, or taking away time that professors can use for discussion or problem-solving.

If that requires changing out of my plaid sweatpants, so be it. Might as well practice now. As long as there's no such thing as a flipped workplace, it'll pay off.

Shenhar is a Plan II, economics and government sophomore from Westport, Conn. He writes about campus and education issues. Follow Shenhar on Twitter @jshenhar.