Texas remains in top 25 despite struggles 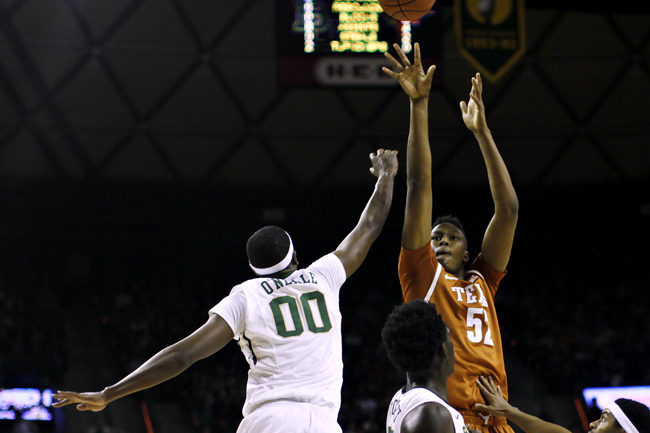 Despite the end of their conference rivalry, Texas and Texas A&M still find ways to compete off the playing field. The latest battle between the two played out in the men’s basketball AP poll, in which Texas beat out Texas A&M for the last spot in the top-25.

Although Texas outranked Texas A&M for the 25th spot, this week’s AP poll marks the latest fall in the rankings for the Longhorns after their worst loss of the season — an 83–86 loss at Baylor on Saturday. Texas opened at No. 10 in the AP Poll in the preseason but has fallen sharply with three straight losses to conference opponents.

Elsewhere in the Big 12, Kansas moved up one spot to eight while Iowa State jumped four spots to 11.

Conference play typically marks the beginning of a long and gruelling stretch without much a break.  But next year, Big 12 teams will get a bit of a break in January to step outside of the rigorous conference schedule.

The Big 12 and SEC announced Thursday that their annual Big 12/SEC challenge will move from December, when it has been played in recent years, to Jan. 30 starting next season.

While the SEC boasts perennial powerhouse Kentucky and a top contender in Florida, the rest of the conference doesn’t quite match up to other top basketball conferences. That should give Big 12 teams the respite they need for the second half of conference play.

In this season’s tournament, Texas drew a challenging game at Kentucky against the Wildcats. But, given the overall talent level in the SEC, most teams should be able to pick up easy wins.

Matchups will be announced at a later date.

The Big 12 named Oklahoma junior forward Ryan Spangler the Big 12 Player of the Week on Monday, after being a key factor in the Sooners’ wins over Oklahoma State and Texas Tech last week. Spangler posted a season-high 20 points in the 81–36 shellacking against the Red Raiders and followed it with 13 points against the Cowboys. He combined for a 78.6 shooting percentage and was 10-of-13 from the free throw line.

Although he is relatively unknown among the nation, senior guard Bryce Dejean-Jones is starting to become a familiar name in the Big 12 — and to Texas. The Big 12 named Dejean-Jones Newcomer of the Week on Monday after averaging 17 points in the Cyclones’ wins over Texas and TCU last week. Dejean-Jones scored 18 points against the Longhorns before tallying 16 points against TCU. He also averaged a 77 percent field goal percentage in the two games.