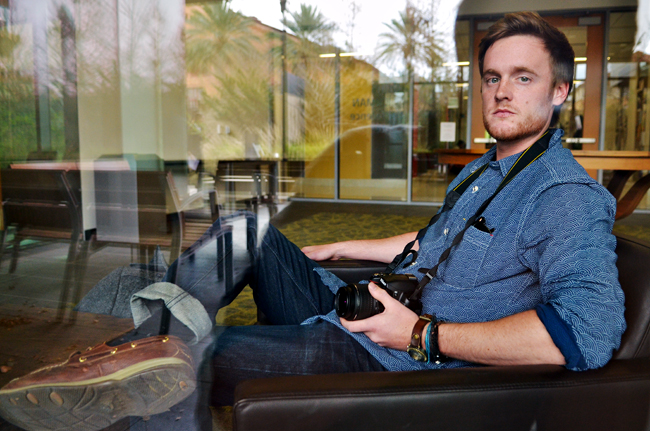 Armed with his camera, his social media accounts and a stack of $5 bills, graduate student Kyle Miller spreads a simple message: respect others.

This year, Miller launched a charitable photo campaign called “5 Dollar Stories,” centered around homeless people — primarily those who spend their days on the Drag. Miller pays each homeless person $5, then posts a portrait with personal quotes on Instagram and Facebook. Miller said he hopes the exposure serves as a platform for homeless people, so that their thoughts can be heard.

Miller said after seeing students go to extreme lengths, such as faking a phone call or text, to ignore homeless people, he realized the two populations did not have basic human connections. Displaced individuals often appreciate a five-minute conversation more than a five-dollar bill, Miller noticed.

“It’s not about money; it’s more of getting people to stop and slow down,” Miller said. “These are people — they should be treated like people.”

Miller decided to pay each of his subjects $5 after much consideration. He said $1 seemed exploitative, and $10 seemed like a bribe. Miller said he pairs the money with things he knows will help the individual such as water, socks and even bananas.

Miller said negative stereotypes toward the homeless are vastly overplayed and that the majority of people he talks to are warm, open individuals who appreciate his efforts to get to know them.

“If you want to take a photo of someone, you have to understand how they are,” Miller said. “I would take somebody’s photo so much differently if I knew them better, so you have to listen to them first.”

Miller said Shoun, a man he photographed, had a particular message of acceptance that still resonates with him today.

Caitlin Collins, a freelance photographer, met Miller through Instagram and said she joined the project because she felt it addressed a seriously overlooked issue. She said her friends support the project, too, and hope to go out on the streets and help.

“I think that by him doing this, it’s a great way to get a lot of young people in the community involved,” Collins said.

Mackenzie Howell runs an event planning business with Collins and accompanies her on outings for 5 Dollar Stories. She said her experience has helped her break out of her comfort zone.

“They just want to be given a chance,” Howell said. “Everyone’s busy; just walk up and start a conversation. It’s not intimidating after you’ve done it a couple times.”

5 Dollar Stories encourages people to not write-off homeless individuals or focus on their past. Miller’s mission statement urges readers to challenge their perspectives on homeless people and learn to be genuinely accepting.

“This is a platform for people that normally wouldn’t be listened to to actually have their thoughts read, looked at and considered.” Miller said.