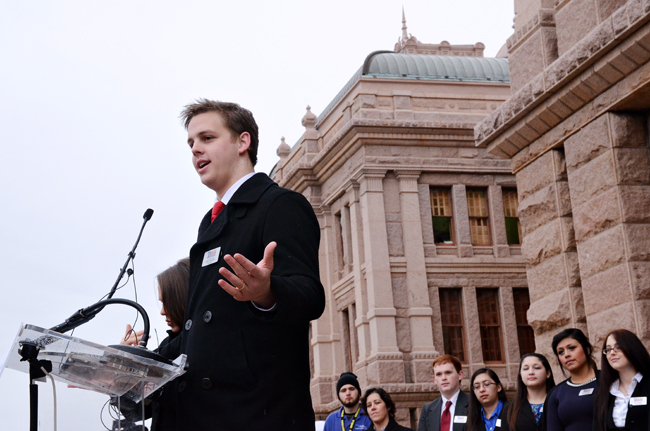 Freezing rain did not stop hundreds of Texas community college students, many of whom hope to transfer to four-year institutions like UT, from meeting outside of the Capitol to discuss their policy priorities for the 84th legislative session.

Austin Community College students attended a rally Tuesday to tell legislators about the issues most important to them, especially the affordability of higher education. If approved, the proposed House and Senate budgets would cut funding for community colleges by about $80 million dollars.

“What we are doing here is empowering you, ordinary community college students, with the understanding that we have the ability to make real positive changes for our society,” said Joel Mason, Collin College student and president of the Texas Junior College Student Government Association.

Daniel McFarlane, UT Transfer Student Association president, said while his transition from ACC to UT was difficult, going to community college first allowed him to save the money he needed to ultimately make the switch.

“A lot of people start off at community college for the sole reason of saving money,” McFarlane said. “That was definitely one of the big pros for me.”

McFarlane said students who transfer from community colleges represent an important population on campus because of their dedicated attitude toward education.

“A lot of the people coming in from community colleges are a lot more serious about their education — most of them want it really bad,” McFarlane said. “They worked very hard to get to a four-year university, so once we do transition in, education means that much more to us.“

At the rally, state Sen. Larry Taylor (R-Friendswood) said it is important to find innovative ways to solve legislative challenges regarding community colleges.

“Only then can we be prepared to serve future students in an effective and affordable way,” Taylor said. “Keep looking for ways to improve your institution.”

According to Daniel Chitty, president of ACC’s honor fraternity, many community college students — himself included — have to work their way through school, and higher tuition costs would set them back.“If we’re starting out already having a lot of debt in the first couple of years, it becomes a burden,” Chitty said.

According to John Gizdich, ACC’s Student Government Assocation president, decreased state funding for community college could lead to increased tuition. Gizdich said he would like free community college to be widely available in Texas.

“Some politicians will say increase minimum wage, but I believe we really need to make community college cheaper or even free,” Gizdich said.

In a proposal last month, President Barack Obama said he is in favor of providing tuition-free community college and said he thinks students who work for their education and maintain a certain GPA should be provided with college options without financial constraints.

Kevin Potter, ACC transfer student and biology sophomore, said he is concerned free community college would bring an increase in the number of students who do not care about school and, in turn, decrease the quality of education.

“I think it is a fantastic ideology that when faced with real life, would fail,” Potter said. “Community college isn’t that expensive as it is. It’s free for a lot of students as it is through scholarships and state-funded programs.”

Community college students also advocated for other legislative priorities, such as program development, college readiness and common course numbering, at the rally.

“I think it’s important that legislators see what a force community college students really can be in the state, for the economy and in our communities,” Chitty said.