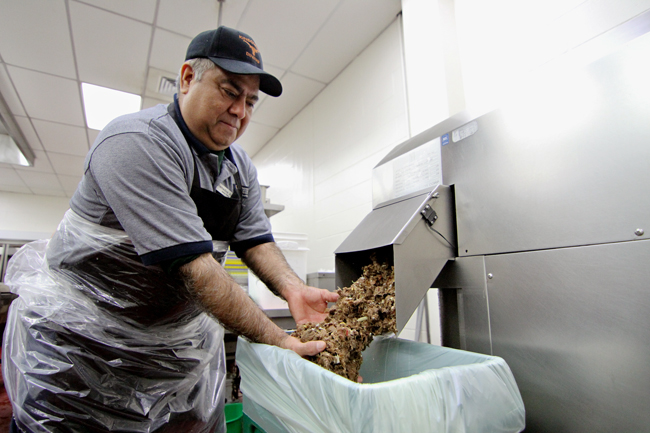 Remedios Avila cleans the compost machine twice a day with wet cardboard. The Division of Housing & Food Service has composted over 250 tons of food waste between September 2011 and September 2012.

My journey with food waste began with a banana peel.

Finding myself one morning of spring 2013 far from the plethora of garbage options in JCL — recycling, compost, landfill — I realized I had nowhere to turn for a sustainable way to dispose of said peel. Trash cans abound at the 40 Acres. We’ve got them in all shapes and sizes: stainless steel, pebbly, solar-powered, square, round. We even have a fair amount of recycling bins, also in many shapes and sizes. But we lack a campus-wide composting system.

Landfills, recycling and composting form the trifecta of trash. Everything we dispose of will end up on one of those three paths.

Composting is often the enigma in this trifecta. Only organic material can be composted, including food scraps, plant-based dishware (which can look deceptively like plastic) and paper products (with or without food contamination). Up until this year, only DHFS facilities consistently provided composting, leading the way in diverting food waste.

But back to my banana peel. Had I put it in the trash can rather than tossing it in my bag to compost at home, that peel would have followed the landfill path, ending up in the anaerobic pit of a climate change expert’s worst nightmare. Food products in landfills produce methane gas, the most potent greenhouse gas and a huge driver of global climate change.

When composted in an aerobic environment, organic waste produces little to no methane. In addition, it creates a useful byproduct: the final compost product is a natural soil amendment that improves plant growth. It’s a win-win.

UT’s long-term goal is to operate a zero waste university—to divert at least 90 percent from landfills and incinerators through recycling and composting. This is doable.

After my banana peel experience, a friend and I applied for Green Fee funds to implement campus wide composting — a lofty goal. Our Green Fee was accepted and funded $25,000, with the stipulation that we instead work with the Union and SAC to pay for compost bins and compactors. The next year was spent in meetings, learning the ins and outs of the Union’s waste streams, consumers’ habits and food vendors.

A waste audit done for the Union and SAC revealed about 72 percent and 76 percent of waste, respectively, could be diverted through either recycling or composting. This is a staggering amount, especially for the Union, which neither recycled nor composted.

By the end of spring 2014, we had a plan. First, we would acquire a new waste disposal contract to include recycling and composting. Next, our Green Fee funds would purchase additional bins and compactors. And finally, the new waste system would be rolled out in fall of 2014, affecting both back of house and consumer waste streams. The SAC would repeat this process the following academic year.

Although we have hit a few snags along the way, this is a critical move toward zero waste for the Union and UT.

The Union’s next step is to simplify waste disposal by changing food and drink packaging to be either recyclable or compostable. In addition, with new signage, outreach plans and familiarity over time, accurate use of the bins will increase.

The Union has taken a leap of faith in working with me and other students to increase waste diversion, helping us Longhorns live more sustainably.

However, we must play our part, too. Pay attention to the bins in which you throw things. Try not to consolidate all your trash into one bag — some of that can be recycled or composted! And most of all, understand that these initiatives matter. They have direct impacts on industrial energy and water use, greenhouse gas emissions, and, consequently, human and environmental health. As we say at the Campus Environmental Center: Bleed Orange, Think Green.

Kachelmeyer is a Plan II, international relations and geography senior from Sugar Land. She is the director of the Campus Environmental Center.