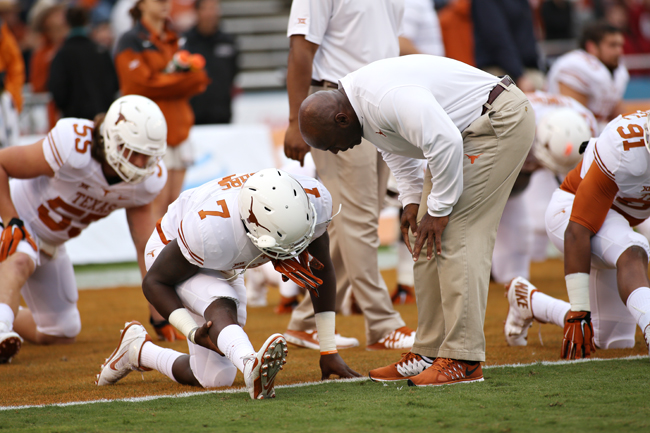 After a busy inaugural season, Charlie Strong will officially assemble his first recruiting class as Texas head coach Wednesday during the 2015 National Signing Day. His 2015 class already has 26 commits, including six early enrollees counted in the 2014 class, leaving five more spots open for the Longhorns. Texas' list of commits is highlighted by four-star linebacker Malik Jefferson, but includes 15 other four-star prospects.

On staff's involvement, from coaches to professors, in the recruiting process: "Our guys did a great job of selling this program."

On recruiting outside of Texas: "The state of Texas will always be our ground, [but] I don’t mind going out of state to win a battle."

On recruiting QB Kai Locksley: "We needed to get another quarterback to add some depth."

On changing the offense for 2015: "We have to tweak it. We just have to build around what we have."

On his mission for recruits: "Graduate, win football games and make them better people."

On freshman making an impact: "Hard to say who is going to play right now, but they’ll have the chance to come in and compete."

On improving team through recruiting: "We were able to meet our needs."

Update: 11:30 am-Gladewater's five-star defensive tackle Daylon Mack has commited to Texas A&M. It was predicted that Mack would commit to A&M, even though his other choices included TCU and Texas. Mack is the No. 4 defensive tackle in the nation according to 247sports.

Update: 10:00 am- Three-star JUCO wide reciever Dominique Reed has decided to stay home and commit to the University of Arkansas. Reed is the No. 9 ranked JUCO reciever in the nation and could have made an impact in red-zone scoring and a deep threat as he is 6 feet 4 inches tall and runs a 4.3 second 40 yard dash.

Update: 9:00 am- Miami, Florida three-star corner back Deandre Baker has decided to stay commited to Georgia. It was thought that Baker could flip his pick to Texas today, but that wasn't the case. According to 247sports, Baker is No. 62 ranked corner back in the nation.

Update: 8:45 am- Rockwall's four-star running back Chris Warren has officialy commited to Texas. Warren is the No. 8 ranked running back in the nation according to 247sports. In his senior year at Rockwall high school, Warren racked up 2329 rushing yards on 248 rushing attempts, and scored 34 rushing touchdowns. Warren will be the key running back for Texas recruiting class.

Update: 8:30 am- Plano running back Soso Jamabo has officialy commited to UCLA. Jamabo is the No. 9 running recruit in the nation according to 247 sports. Jamabo had a phenomenal senior year in which he rushed for 2279 yards on 234 attempts, and rushed for a whopping 44 touchdowns.

Update: 8:00 am- Aledo's four-star receiver Ryan Newsome officially flipped his commitment from UCLA to the Texas Wednesday morning. Ranked the nation's No. 27 receiver by 247sports, Newsome scored 29 total touchdowns as a high school senior. Newsome adds another option to the Longhorns' receiving corps.

Update: 8:00 am- Beaumont’s three-star safety PJ Locke offcially flipped his commitment from Oregon to Texas Wednesday morning. Locke, who played at Central Senior, is the nation’s No. 38 safety, according to 247sports. He joins Texas as the 2015 class’ fifth defensive back, replacing three-star safety Jamile Johnson who de-committed from the Longhorns on Sunday.