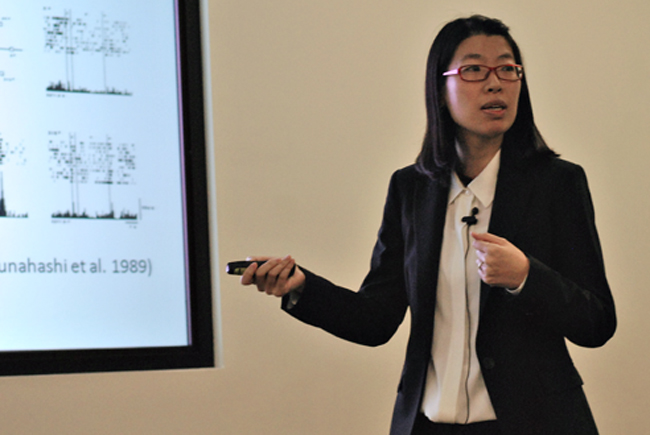 Sukbin Lim, neurobiology postdoctoral researcher at The University of Chicago, is working to build a conceptual model of the brain that will help researchers better understand how neurons communicate and affect short-term and long-term memory.

Lim spoke on campus Tuesday about how models of neuron activity in the brain can be used to predict cognition and memory function, which could help research with Alzheimer’s and other neurological diseases.

“The brain is a network of neurons randomly firing, and so [I studied] how this affects short-term and long-term memory,” Lim said.

By applying her Ph.D. in mathematics to neuroscience, Lim developed a theory to analyze the randomness of neurons firing in the brain, which she plans to test on primates.

“Positive [neuron] signal is thought to be most important [to study in neuroscience], but interaction between negative and positive neuron signal is also important,” Lim said. “There’s indirect evidence in brain activity, and we have to think about what is biologically plausible.”

Lim said if she builds a testable model for parts of the brain that control short-term and long-term memory, she hopes breakthroughs in how different areas of the brain communicate and interact will follow. A model could be used to increase individuals’ visual and auditory memory and overall cognitive skills.

“Neurons are imperfect, but neuroscientists aren’t sure whether this unreliability is a bug or a feature,” Golding said.

Ian Nauhaus, psychology and neuroscience assistant professor, said he found Lim’s models on memory and learning interesting because this type of model is brand new.

“There are other models which are very similar, but her model is novel because it shows graded effects in memory,” Nauhaus said. “Actually implementing that data into a model is not trivial. In neuroscience, models are important because they allow us to predict what’s going to happen.”