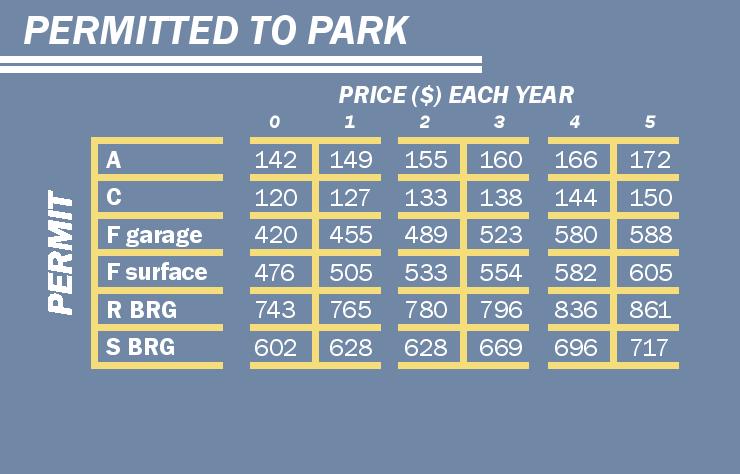 UT will begin charging more for parking permits across the board starting Sept. 1, in line with a report from the UT Parking Strategies Committee.

The increases will apply each year for at least the next five years.

The committee opted to adjust each permit separately, fearing that an equal increase to all the permits would make some options unaffordable.

“Across-the-board increases place a larger burden on low-cost permits and, as such, potentially on those in the university community least able to afford such increases,” the report said.

Gerald Harkins, associate vice president for Campus Safety and Security, said the report focused on ways the parking permit fee system could be priced closer to market rates of universities similar in size to UT.

According to the report, the staff at UT-San Antonio, Texas Tech and Texas A&M can purchase permits starting at $335, $236 and $356, respectively. The lowest staff permit at UT-Austin starts at $142.

The goal of increasing parking permit fees is to better cover the cost of the Parking and Transportation Service. Since PTS is an auxiliary department of the University, only money from permit fees, garage fees and citations fund the cost.

Tom Brown, government junior and member of the Parking Strategies Committee, said the increased funding for PTS is necessary for the services they provide the University.

“Parking and Transportation does more for our campus than meets the eye,” Brown said. “PTS provides funds for campus safety and security, which houses the Emergency Preparedness Department, Environmental Health & Safety, Fire Prevention Services and UTPD.”

Undergraduate Studies sophomore Laney Whitney commutes to campus every day and parks her car in the Speedway garage. She said driving to campus is an expensive last resort.

“As a commuter, I think the increasing garage prices are ridiculous,” Whitney said. “I really don’t have a choice but to buy a pass since the buses don’t run where I live.”

Whitney said she understands the need to pay for the changing parking needs on a campus like UT-Austin but further stressing students’ budgets should be a last resort. According to the report, some of the increase in permit rates will go to cover construction of additional spaces.

“They should figure out an alternative to charging struggling college students who will probably graduate before they see the benefits of more parking,” Whitney said.

The report found the parking rates at UT-Austin have been historically low, with small increases in price from year-to-year, ranging from 0.74 percent to 1.54 percent.

Harkins said PTS wanted to charge only as much as would be needed to operate.