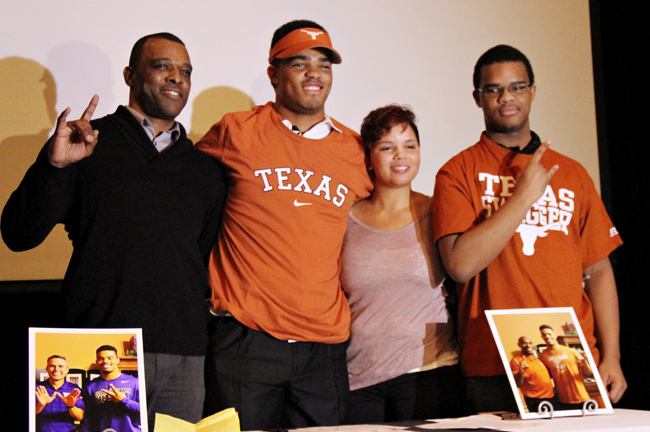 The Longhorns signed two tall receivers who can provide playmaking abilities in 6-foot-2 John Burt and 6-foot-4 Gilbert Johnson. Texas’ starting quarterback next season — whether it be sophomore Tyrone Swoopes or redshirt freshman Jerrod Heard — can have the confidence to throw the deep ball when either receiver has a height advantage on a cornerback.

Texas also signed Chris Warren, a 6-foot-2, 239-pound running back who is ranked the No. 8 running back in the nation, according to 247Sports. Warren has the ability to run strong up the middle and to gain a significant amount of yards after contact because of his solid frame.

In addition, the Longhorns found success at the tight end position, signing of Devonaire Clarington, the No. 7 tight end in the nation, according to 247Sports. Clarington’s athleticism, combined with his height and strength, will stretch the field for the Longhorns because of his ability to run down the seams and be a mismatch for most linebackers.

The question the Longhorns face — a question as big as Texas — is who the quarterback will be next season. Swoopes wasn’t consistent enough when it came to getting the ball to his receivers, and Heard has not yet been tested. Although Texas signed Kai Locksley, who, according to Strong, will play quarterback, he isn’t a marquee name in the quarterback position.

The last time the Longhorns found consistency at the quarterback position was with Colt McCoy. Texas now has to work on developing Locksley, Swoopes or Heard in order to improve on last season’s quarterback play.

Texas wins the Big 12 in recruiting:

Texas signed 14 recruits ranked in ESPN 300, and the rest of the Big 12 combined for 20 such recruits. Strong alluded last year he wanted to put the “T” back in Texas, and the results of his first recruiting period at Texas is a big first step toward that statement.