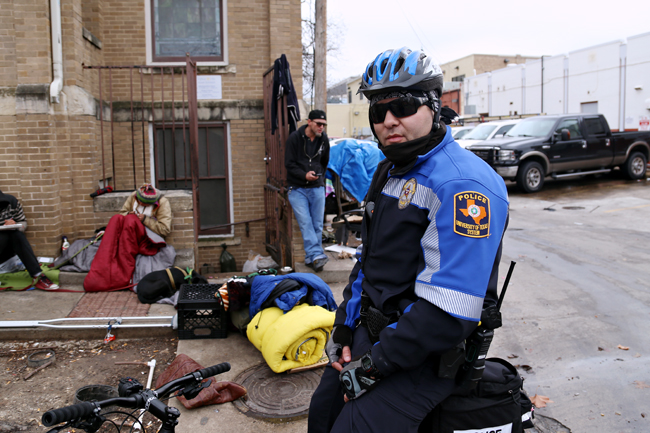 Officers from both UTPD and the Austin Police Department started a more focused initiative to minimize crime homeless people commit on Guadalupe Street.

Grayson said officers have seen a larger congregation of the community’s homeless population around the artists’ market on 23rd Street. Many of those individuals receive services from the surrounding churches, as well as food from some of the businesses, according to Grayson.

The two police forces are working to curb crimes near that area in West Campus.

“What prompted [the initiative] was the aggressive panhandling and the homeless population harassing the vendors there in the square,” Grayson said.

Although the area along Guadalupe Street and further west of campus is in APD’s territory, UTPD Chief David Carter said all the officers are working together to use all the resources available.

“We want to support our community, and our community that we police and protect is not always strictly on campus, so that’s what we’re doing here,” Carter said.

Journalism senior Carola Guerrero De Leon said a homeless man assaulted her last July while she was walking along the Drag.

Guerrero said, besides that instance, she has had very positive experiences with other members of the community but she thinks this new initiative will be helpful to the area.

“These people need help — granted their residential status around the UT community is not what many consider conventional — but they are a big part of our community,” Guerrero said. “Working toward the implementation of a more inclusive system that puts a bigger focus on education rather than punishment is the way to go.”

Carter said officers who are part of the UTPD bike unit are working on becoming more visible to the students who live in West Campus, the businesses along the street and the homeless population to identify particular individuals who are aggressive toward businesses and students on the street.

“We’re getting to better understand the area and the issues surrounding that,” Carter said.

Carter said both UTPD and APD are increasing their visibility and presence in the area. But the officers are mainly attempting to know students so they will feel comfortable approaching them if they have been having a reoccurring problem with an individual, even if it is not an emergency issue.

“If we get information that there’s somebody who’s being aggressive toward a student … we’re going to try to find out who that person is,” Carter said. “Whether we can actually arrest them or charge them with some kind of crime is obviously dependent, but we’re not simply going to wait around for crime.”