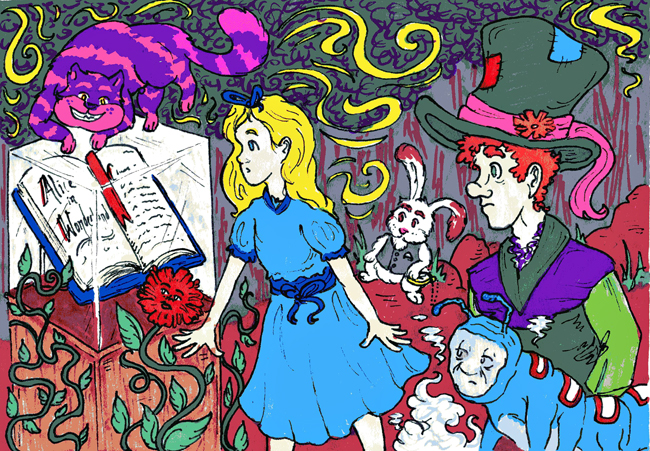 Human-sized playing cards cover the walls of the Harry Ransom Center and fully-decorated tea tables with pullout chairs prompt visitors to engage in games of make-believe. For children and adults alike, the “Alice’s Adventures in Wonderland” exhibit offers a distinctive break from traditionally organized museum exhibits.

The Ransom Center will open its new exhibit, “Alice’s Adventures in Wonderland,” on Feb. 10. The exhibit celebrates the 150th anniversary of Lewis Carroll’s classic fantasy novel.

Danielle Brune Sigler, the Ransom Center’s associate director for research and programs and the exhibition’s curator, said she faced a major challenge when constructing an exhibit narrative that would address the novel’s complicated story. Although Sigler’s first instinct was to simply follow “Alice in Wonderland”’s plot, she eventually moved in a different direction.

“It’s embedded in our culture,” Sigler said. “People use words that come from Carroll’s story, and they casually reference the characters. Carroll influences other important works … so instead, I decided to move through major theme groupings.”

Sigler said she was lucky to have a wealth of material to choose from. Warren Weaver and Byron and Susan Sewell made extensive donations, including manuscripts, film strips and other “Alice in Wonderland” paraphernalia, to the exhibit.

The Ransom Center took special measures to display the materials to the public because many were old and fragile, according to Sigler. For example, the exhibit’s paper conservator Heather Hamilton worked on the paper film strips used to project videos of “Alice in Wonderland.”

“These film strips might have been unusable and forgotten,” Hamilton said. “The paper was almost translucent, and it had been taped. I was able to minimize the appearance of damage by using Japanese tissues.”

Other materials in the exhibit presented challenges for the Ransom Center. The exhibit features one particularly old photograph, and though typically, vintage photographs are displayed behind heavy curtains to prevent light damage, the Ransom Center used a different approach.

“We wanted to do something more contemporary, so we put it behind a glass frame,” chief preparator David Aaronoff said. “It’s completely black normally. But in the installation, there’s also a motion sensor, so when someone’s standing in front of it, it turns clear until they leave again.”

Aaronoff said the Ransom Center made a special effort to ensure that the exhibit is accessible and interesting to children.

“We varied the heights a bit,” Aaronoff said. “We put more colorful things at a child’s eye level and text-heavy things at an adult’s height.”

The exhibit features several custom-designed installations, such as a rabbit-hole that children can walk through. The exhibit also displays cartoons, children’s books and other kid-friendly features.

Above all, Sigler said she hopes to encourage an active interest in archives through the Alice in Wonderland exhibit by offering the public the opportunity to interact with cultural artifacts.