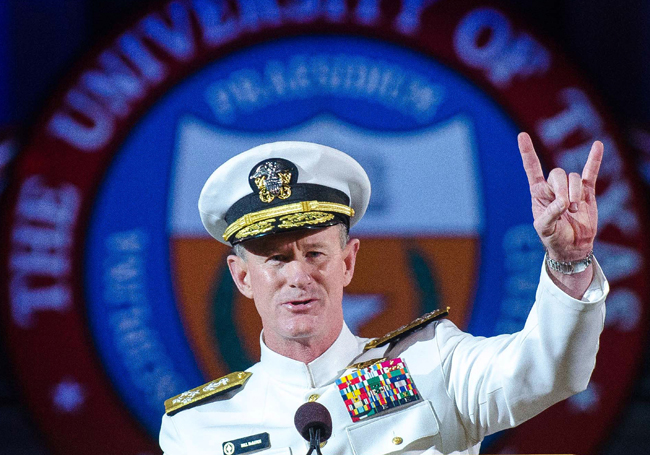 AP Photo/ The University of Texas at Austin, Marsha Miller

McRaven said the state already pays for the education of undocumented students and questioned the idea the state shouldn’t continue to provide similar assistance for those students as they pursue higher education.

“The state of Texas has paid to get [undocumented students] through high school, and, to think that we are not now going to help them get a college education, to me as an educator, I think it’s not right for us to do that,” McRaven said.

McRaven emphasized that undocumented students will still be required to pay tuition for their education.

“If it is about educating the young men and women of Texas, young men and women who are — oh, by the way — going to pay in-state tuition, it’s not like we’re giving them a free education,” McRaven said. “I think it is the morally right thing to do.”

McRaven said his position as chancellor means his first priority is assuring quality education for all Texans.

Gov. Greg Abbott partially endorsed the law, signed by former Texas Gov. Rick Perry in 2001, which allowed undocumented students to pay in-state tuition when attending public colleges and universities across the state. This was the first such law signed in the United States.

According to a statement from Abbott’s office, “Governor Abbott believes that the objective of the program is noble, but the law as structured is flawed, and it must be fixed.”

In an interview last week, Lt. Gov. Dan Patrick said denying undocumented students in-state tuition rates was a question of fairness to the students who are fully documented citizens.

Patrick said he thinks the legislature should end in-state tuition for undocumented students.

“I think anything the United States gives away free to people who don’t come here legally, you could argue, is a magnet,” Patrick said.

In response, McRaven said he wants to see the proof that higher education acts as a magnet for undocumented immigrants.

“I think it goes back to, how do you disprove this negative?” McRaven said. “Can you show me the statistics that say people are coming across the border in order to get a higher education? I mean, I haven’t seen those statistics.”