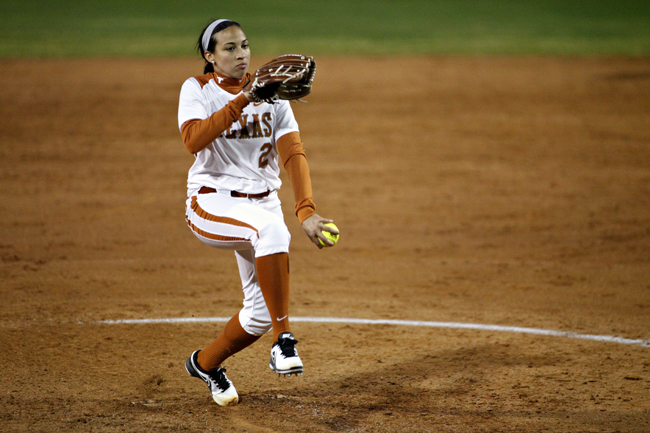 Led by sophomore pitcher Tiarra Davis, who now has a full season under her belt, the Texas pitching staff looks to be a dominant force as they kick off the season Friday in the Kajikawa Classic in Tempe, Arizona.

“We’ve got five [pitchers] that we’re working,” head coach Connie Clark said. “A big staff, we’ll rotate them through, we’ll see what it looks like, but Tiarra brings some really good things to the table.”

As a freshman, Davis recorded a 2.38 ERA, holding opposing hitters to a .208 batting average while striking out 176 in 200 innings last season. She wasn’t just a threat in the circle, as she hit .313 with 25 RBIs and 13 runs, ultimately earning her recognition as Big 12 Freshman of the Year.

“I think going off of last year’s season, I have a basis to build on,” Davis said. “I’m really looking forward to the season and what it has to bring.”

Davis, who threw three one-hitters and six complete game shutouts in her freshman year, said she hopes she is ready to step up to the mound for the Longhorns to take them to the next level.

“Coach Clark and I had a number of conversations last year about me believing in myself,” Davis said. “This year, I’m hoping to be the top pitcher in our conference.”

Davis isn’t the only pitcher on the team, however.

Davis is joined by senior Gabby Smith and sophomore Lauren Slatten as veterans in the rotation. Freshman pitchers Kristen Clark and Erica Wright will debut this spring.

“We’ve got a great freshman, Erica Wright, in the mix who just competes hard,” Clark said. “She’s got that kind of ‘wild thing’ piece going on.”

Joining Kristen Clark and Wright as new additions to the team are shortstop/outfielder Alyssa Angel and catcher/utility Randel Leahy.

“Our freshman class isn’t huge, but they are definitely difference makers,” junior second baseman Stephanie Ceo said. “I truly believe [we have] a great chance to make it all the way this year.”

In the ESPN.com/USA Softball poll, Texas is ranked No. 25 going into the season, and the team is projected to finish third in the Big 12. After amassing a 35–23 record last year and capturing the school’s 10th consecutive NCAA tournament bid, the team is looking to make the leap to the next tier and advance beyond regionals.

“I think this team is very optimistic,” Clark said.