Where Are They Now: Kicker Anthony Fera 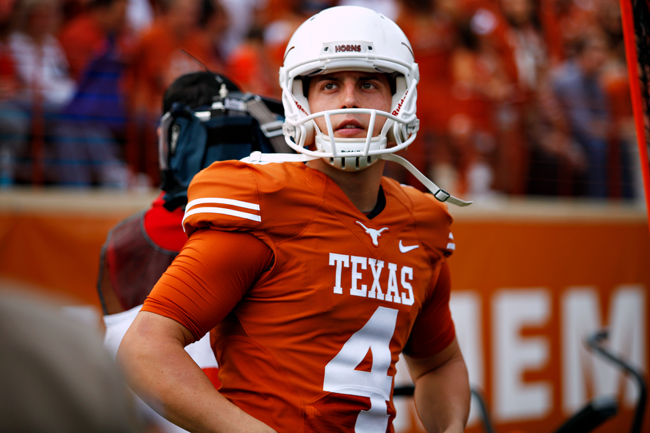 After transferring to Texas from Penn State and suffering a groin injury that delayed his Longhorn debut, Anthony Fera took to the field his senior year to become one of the most consistent kickers Texas has ever seen. During his tenure, he hit 15 straight field goals — tied for the longest streak in school history.

Fera, who kicked and punted for the Longhorns in 2012 and 2013 after transferring from Penn State following the Sandusky scandal, was a consensus All–American in 2013 and a finalist for the Lou Groza Award, which is given to the nation’s best kicker.

“We saw the real Anthony Fera in his last year at Texas,” former head coach Mack Brown said. “He was focused and excited, and you could see that in his kicking. To go from such a difficult situation to becoming a Groza Award finalist really speaks to his determination.”

Kicking may be the most high-pressure job in football, but for Fera, the task became second nature.

Now a year removed from college, Fera needs the confidence and determination that allowed him to thrive amid a collegiate career sullied by scandal and injury. The kicker, whom ESPN draft analyst Mel Kiper Jr. referred to as the best in the 2014 draft class, is still trying to join the tiny fraternity of NFL kickers and punters.

“It’s a waiting thing,” Fera said. “It hasn’t really worked out for me yet.”

Though he was not drafted, the former Longhorn standout did get a taste of the NFL dream at the Miami Dolphins’ rookie minicamp. But by the time the regular season rolled around, Fera found himself without an NFL roster spot.

“Right after the draft, I went down to the rookie minicamp down in Miami and had a little setback with a school injury, just a strained muscle, and a couple weeks later I went to Jacksonville, but they were looking more for a punter,” Fera said. “That didn’t really work out as planned.”

Despite the yearlong setback, Fera is still dead set on landing in the NFL. He now spends his time hopping around the country, punting and kicking at veteran combines and working out in Austin.

Still, no player can maintain peak physical performance for long — as anyone who has labeled the NFL as “Not For Long” can attest. For a player such as Fera — an undrafted specialist hanging in limbo after a full season on the market — it is especially important to have a backup plan in place.

When Fera is not trying to maintain NFL levels of fitness, he is busy learning the ins and outs of the oil industry from his father at MidStar Energy, a directional drilling company in Houston. He hopes to eventually have enough industry knowledge to land a career in sales.

“I’m just trying to learn the whole process at the moment,” Fera said. “Every now and then, I’ll go out to an oil rig and check out a few things.”

Fera said his fledgling career will not pry him away from his dream of landing on an NFL roster.

“My main focus is making the NFL,” Fera said. “I’ll probably give it a try the next year or two.”