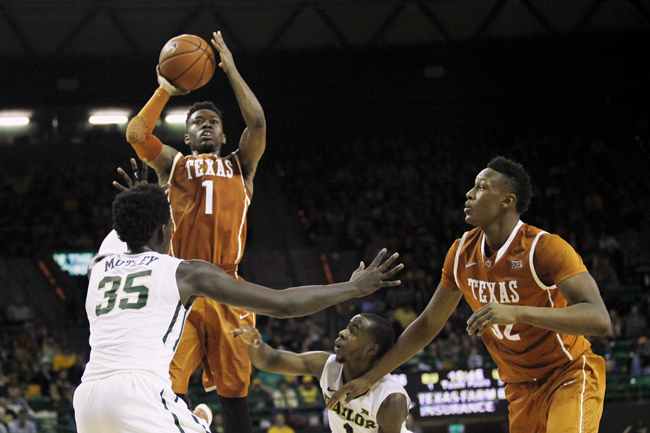 With senior forward Jonathan Holmes and junior guard Javan Felix both out with concussions, No. 25 Texas desperately needed someone to step up offensively in its game against Kansas State Saturday.

Sophomore point guard Isaiah Taylor did just that, turning in one his best performances of the season to lead Texas to a 61–57 road victory over Kansas State and breaking the Longhorns’ four-game losing streak.

Taylor made a living near the basket, connecting on a series of layups and short jumpers on his way to a game-high 23 points on 6-of-10 shooting. Even when he wasn’t finishing from the field, Taylor succeeded in drawing foul after foul to get to the free throw line, where he went 11-of-15.

With 1:15 remaining in the game, the Longhorns led 57–50, but Kansas State tightened its deficit to two with under 30 seconds remaining behind a quick 7–2 run. Taylor missed two free throws with 0:25 remaining to give the Wildcats a final chance to tie or win the game, but senior forward Thomas Gipson couldn’t finish his late layup attempt, and Taylor redeemed himself with a pair of free throws to end the contest.

Given the temporary loss of Holmes and Felix, who had combined for 49 percent of the Longhorns’ 3-point makes coming into the game, Texas had to change its offensive approach. Instead of relying on shots from beyond the arc, as they had unsuccessfully done in recent contests, the Longhorns focused on getting shots near the basket.

Taylor was at the forefront of this offensive game plan, and he consistently weaved his way into the paint to get easy looks or draw fouls. Texas did an especially strong job of dominating inside in the first half, outscoring the Wildcats 14–2 in the paint before halftime. The Longhorns finished the game with a combination of eight dunks, layups and tip-ins.

Junior forward Connor Lammert and junior center Prince Ibeh both played major roles in the Texas victory. Lammert led the Longhorns with nine rebounds and went 3-of-6 from beyond the arc on his way to 12 points, and Ibeh contested shots near the basket all game and tied his season high with four blocks.

Behind Ibeh, Texas played far better on defense than it had during its four-game losing streak. In those four games, the Longhorns’ previously stout defense surrendered an eye-popping average of 78 points per game. On Saturday, the Wildcats struggled to find a rhythm against the Texas zone, shooting 31.9 percent while making just seven shots inside the 3-point arc.

With their victory, the Longhorns’ record improved to 15–8 on the season and 4–6 in conference play. They have a chance to continue making up ground in the Big 12 standings in the upcoming week, as they have a very winnable pair of home games coming up — against TCU on Wednesday and Texas Tech on Saturday.