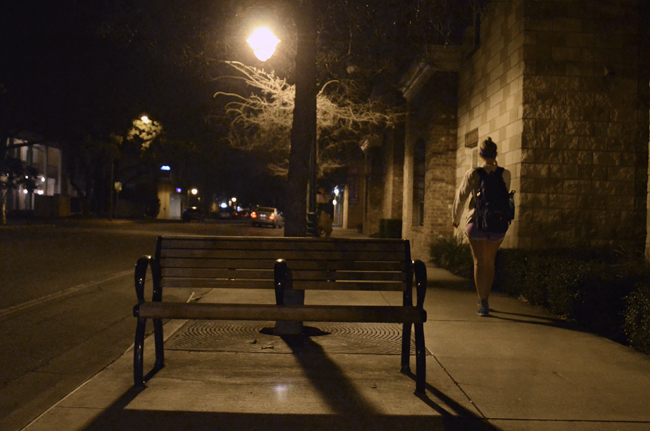 City officials are planning to add lighting, trees and wider sidewalks to West Campus as part of a parking benefit program between the city and University Area Partners, a West Campus neighborhood association.

The project, which began in 2012, first replaced free two-hour parking spots with metered parking spots. The profit from the parking meters goes toward initiatives intended to benefit the neighborhood, according to Steve Grassfield, the city’s parking enterprise manager.

“The revenue from the parking meters — minus the city costs, which are the costs of the pay stations, enforcement, paper, back office support … and then whatever is left — over 51 percent of that money goes to the neighborhood,” Grassfield said.

Since the start of the project, the city has already spent approximately $250,000 on improving sidewalks in West Campus, according to Grassfield. The initiative also includes benches for the sidewalks, as well as more lighting.

Grassfield said after the city widened sidewalks along Rio Grande and 23rd streets, pedestrian traffic tripled in the area.

“When we had two-hour parking, or no regulation on the parking, people would park there for an entire semester,” Norman said. “The car would never move. But now with paid parking it really does turn over, and people think about if they want to pay to have a car.”

“[The sidewalks] aren’t even, so some spots flood when it rains, and it makes it hard to walk through,” Reyes said. “We have too many people in the area for how big the sidewalks are.”

Grassfield said other cities, such as Houston, have implemented similar parking benefits in neighborhoods after hearing about the project in West Campus.

“Typically what you see in paid parking, [money] goes in and nothing really goes back to the community and this does, which is something we like because there’s only so much city money, and this goes right back into neighborhood where the revenue was produced,” Grassfield said.

Each project takes several years to finish, but sidewalk expansion also occurs with private development in the area, including the construction of new residential complexes. Norman said private development helps the project continue because it offers more opportunities for funding.

Norman said the project mainly focuses on streets that run east to west. The city will begin making improvements to 21st, 22nd and 25th streets next.

“It’s important to fix that up, so it can bear the traffic and is comfortable and safe,” Norman said.