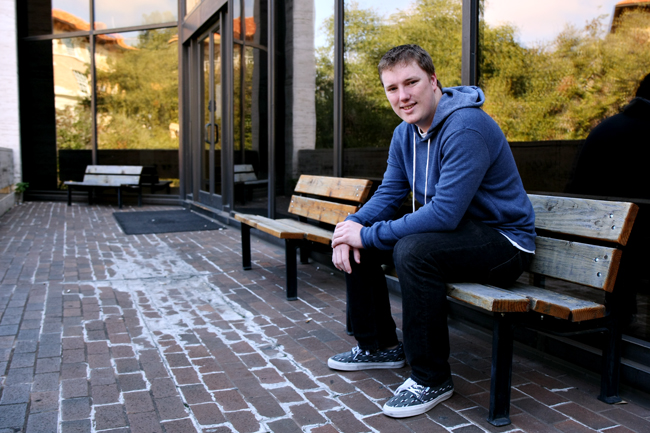 Ever since his mom let him get a Facebook his freshman year of high school, management information systems sophomore Andrew Watts has been addicted to trying out new social media platforms. He swipes open his phone to check Twitter, Instagram, Snapchat, Cyber Dust and Yik Yak notifications all throughout the day. Unlike the millions of teenagers who tweet and post every day, Watts' experience recently earned him national attention.

Watts posted a story called “A Teenager’s View on Social Media” in January on the blog-publishing platform Medium. He discussed his opinions on social media sites, such as Facebook, Twitter, Instagram, Yik Yak, Snapchat and Tumblr. Watts wrote the post after reading numerous technology articles attempting to describe teenage social media habits — none of which were actually written by teenagers.

“My phone was constantly buzzing with tweets about it, and I could tell this was becoming something,” Watts said.

Less than two weeks after posting the blog, the news site TechCrunch flew Watts out to San Francisco for an interview. While in California, he toured Medium’s offices. Louis Gray, a tech blogger and Google analytics advocate, also drove out to meet Watts for lunch in San Francisco, where the two
discussed technology.

“It’s been mind-boggling,” Watts said. “Seeing people in the technology community who I really respect comment on something I wrote and have people follow me on Twitter that I have been following for years is insane.”

The post received mainly positive reviews at first. Watts said he thinks people read his piece because it describes social media in a simple way. For example, the post calls Facebook “dead” like an “awkward family dinner party.”

“Honestly, I believe that a lot of people in our age group have the same views,” Garibay said. “The article became popular because it’s the first time someone really was honest about what a lot of people our age think about these networks.”

Tiffany Zhong, business developer and marketer for Product Hunt — a website where people can post and rank products and apps — read the blog before it went viral.

“Andrew’s writing is fantastic,” Zhong said. “It grew in popularity because there haven’t really been any recent pieces written by teens diving into a deep analysis on current social media.”

The blog also attracted its share of criticisms. People argued that Watts’ age, 19, made him too old to accurately give a teenager’s perspective. They also claimed that Watts’ views do not apply to all teenagers and should not have gained so much popularity.

“They thought I was speaking for everyone, but I wasn’t,” Watts said. “These were just my own opinions.”

Watts still continues to share his opinions on the blog. He recently wrote a post encouraging other teens to showcase their thoughts through blogging. He said people in the teenage bracket are often told their thoughts are not valid, but the reaction to his post certainly proves otherwise.

“I think we’re in a really prime data set that companies try to go after,” Watts said. “I think people should capitalize on that and create content that expresses what they’re experiencing at this time – whether it’s technology or not.”